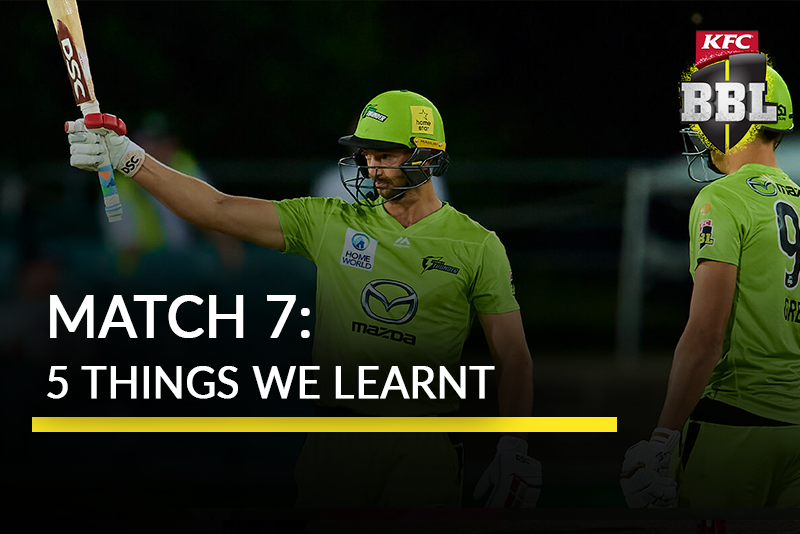 In sports, unlikely heroes create the most interesting stories. It seems as though the last few days’ BBL fixtures are all about bowlers suddenly finding their inner batsmen. When Brisbane Heat started playing Sydney Thunder, nobody knew what magic would unfold, but by the end of the match, everyone stood in awe. There were plenty of highlights from the match, but you know which one we’re itching to talk about in our 5 talking points from Brisbane Heat vs Sydney Thunder.

After a very poor CPL, Chris Lynn started the BBL with an unremarkable 20. His form was in question, as was his ability to lead Heat. However, today he silenced his critics with a solid 69 off 44. Although it could be said that he got something of a foundation to build on, his team lost several wickets around him while he kept the scoreboard ticking - and ticking fast. He was instrumental in getting his team to a solid score of 178, and despite the loss, he was the reason they came away with the Bash Boost point.

If Lynn was instrumental in getting the team to 178, so was Jack Wildermuth. Coming in at number 6 with just 17 deliveries to go, Wildermuth 11 of those to blast his way to 31. Without his efforts, chances are his team would have stayed in the 160 region. Such cameos make or break T20s, and its importance cannot be understated.

3. Horrible start to the chase

With two batsmen gone within the first over, one wouldn’t have fancied Sydney Thunder’s chances. Usman Khawaja went soon afterwards, following a small blitz. Alex Ross and Baxter Hold, and later Ben Cutting kept the chase on, but they were way behind the required rate. At 88-5 after 12 overs, it seemed as though Thunder’s feeble hopes hung with Ben Cutting. Someone else, though, had other plans.

4. Could Brisbane have done better with the ball?

Short answer would be yes, definitely. That being said, only one bowler was truly responsible for the way in which the match was lost. The aforementioned Wildermuth did extremely well to pull off 3 for 23 off his 4. Mujeeb ur Rahman and Mark Steketee also did reasonably well, and although Kuhnemann was expensive, he still picked up a wicket. It was Ben Laughlin upon whom trust was mistakenly placed for the important 19th over. His shockingly bad bowling left his opponents with no need for a 20th. We can only hope that he can bounce back from this.

Someone with a batting average under 7 would usually be content with 4 overs, 2 for 32. They might even be content with the odd 20 or 30 here and there, or holding up one end while an expert sees out the game. But what Daniel Sams pulled off today with the bat was nothing short of extraordinary. Coming in with his team in dire straits, he opened fire on the BH bowlers and absolutely demolished them. Not only did he rampage his way to 65 in the vein of Daniel Worrall from yesterday, but he went full Carlos Brathwaite to hit four massive sixes off the penultimate over to win the match outright.

After two losses on the trot, Brisbane Heat will get a prolonged rest period as their next match is against Adelaide Strikers a whopping 8 days later. The match will take place at the Brisbane Cricket Ground, Woolloongabba, Brisbane at 1:45PM IST on Wednesday, December 23. Sydney Thunder, meanwhile, will rest a day less as they face off against Perth Scorchers at the Manuka Oval in Canberra at 1:45PM IST on Tuesday, December 22.

Thanks to Daniel Sams, we were right on the money with not only the toss, but also the result.

As for other predictions, Sydney managed to get the most fours, for what it’s worth. Join us next time when we review the second encounter between Hobart Hurricanes and Adelaide Strikers! 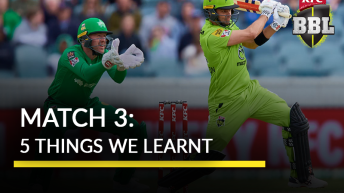 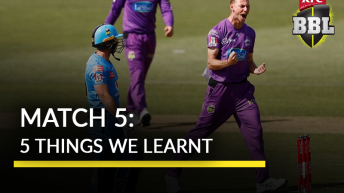 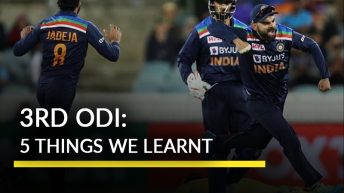