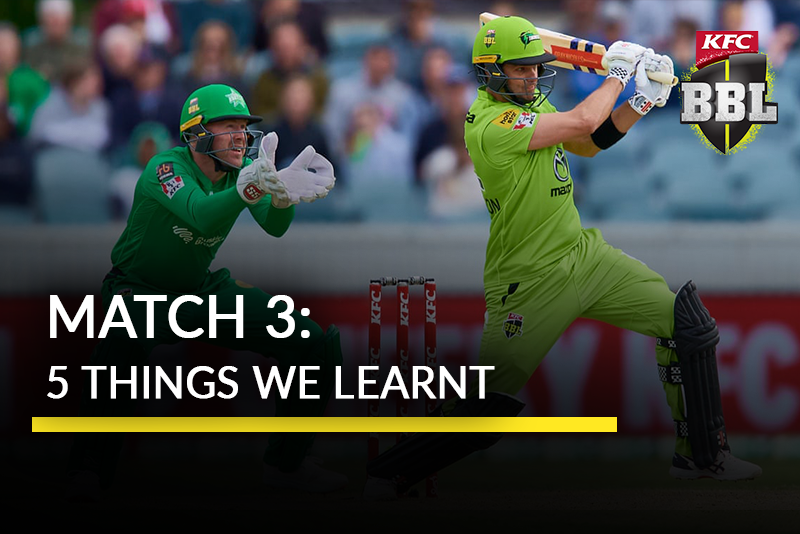 With two wins on the trot, and 2 Bash Boost points as the cherry on top, Melbourne Stars have started their 2020 campaign in style and substance. Their captain is in good form, multiple batsmen are doing well, and their bowlers are striking when needed, or keeping things economical otherwise. Sydney Thunder put in a good effort, and looked to be in a good position to take the win at one point, but like their regional fellows Sixers, they just couldn’t close it out. A lot to look into and a lot to assess in our 5 talking points from Melbourne Stars vs Sydney Thunder.

1. The asset that is Marcus Stoinis

He was amazing for the Delhi Capitals in the IPL, and although he had a poor first match and isn’t being able to bowl due to a neck strain, Marcus Stoinis is proving - as usual - that he is a fantastic cricketer capable of helping any team he gets into. After a duck in his previous appearance, he came back big with a rock-solid 61 off 37 that not only set up the foundation for the rest of the inning, but basically made the difference between the two teams.

Sure, 39 from 29 isn’t all that good on paper, but after 46 in the last match, it’s a solid contribution. Starting in the ODIs against India, it’s been a good run for Maxwell. He didn’t bowl much today, but he certainly has a good arm when required. Throw in his decision-making as a captain, and you have a one-man army. If his form continues, the Stars will have plenty of reasons to fancy themselves for the title.

3. Plenty of wickets, but not enough run control

Picking up 8 wickets in 20 overs is a good feat for any team, and Sydney Thunder did a good job of not letting the Stars do much in the second half of their inning, but the damage was done in the first half of the match. Daniel Sams and Tanveer Sangha did reasonably well, but Chris Green and Nathan McAndrew were way too expensive.

When two players combinedly score 100 while chasing 169, it’s heartbreaking for them to see the others being unable to get the remaining 70. Alex Hales could and should have shown more intent, and the dots he gave away ultimately pressured those lower down the order. That being said, there’s no excuse for Thunder’s last 7 batsmen scoring a total of 16 runs from 23 balls with just one boundary between them. Absolutely dismal.

5. Zampa and Hatcher - the bowling duo that turned the game around

Although Liam Hatcher was fantastic for his 4-0-28-3, Adam Zampa’s performance was more effective, and made the difference in the second inning. It’s rare to see a bowler give away less than 4 an over in a T20, and exceedingly rare to see one only give away 2.5. His player of the match was well-deserved, and one can only hope that he comes up with more performances like these in the weeks to come.

What’s next for the two teams?

With a solid lead secured, Melbourne Stars face Perth Scorchers up next at the Aurora Stadium, Launceston at 1:45PM IST on Wednesday, December 16. Sydney Thunder, meanwhile, will be looking to get off the mark against fellow-first-match-losers Brisbane Heat at the Manuka Oval in Canberra at 1:45PM IST on Monday, December 14.

MS won the toss and also the match. Hales and Maxwell did well but couldn’t get to 50, and neither Hales nor Cartwright top scored for their respective teams. With Coulter-Nile and Milne not playing, the bowling predictions fell flat. As for the boundaries, we were spot on. Join us next time when we review the match between Perth Scorchers and Melbourne Renegades!