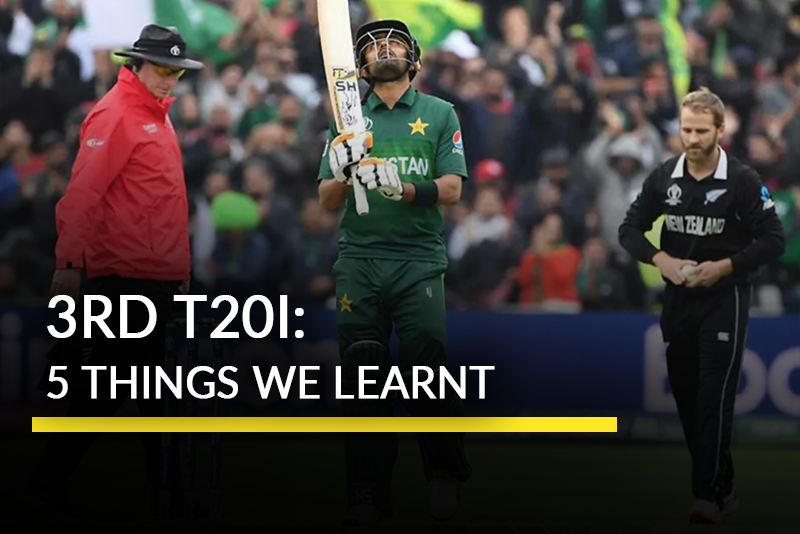 With a win in the last game of the 3-match series, Pakistan have avoided the whitewash and will be going into the Test series with a little more confidence. The T20 format is custom-built for surprises, and it’s a surprise result that the world got from the third T20I between New Zealand and Pakistan. All three matches were pretty tightly fought, but where those went to the home side, this one was taken by the visitors. As simple as that might sound, the match wasn’t without its fair share of points of interest, and for a quintuplet of such, here’s 5 talking points from the third T20I between New Zealand and Pakistan.

1. The young gun of the Black Caps

He might be 29, but Devon Conway is relatively new to the New Zealand national team. Perhaps his services should have been availed earlier by his country, though, as he averages a whopping 40.59 in T20s, and with today’s knock, 58 in T20Is. Even though his career might not last for more than a decade at most, Conway is quickly becoming an indispensable presence in the Kiwis’ lineup. One can only hope that his form stays with him throughout his career.

2. Is the continued presence of Martin Guptill in the NZ lineup justified?

Look, we know that the man has had some great performances over the years, but as of late, he has been struggling badly. Cricket is all about current form, and having Colin Munro or someone similar at the top of the order would provide the Kiwis with a much greater threat than someone who hasn’t performed well since cricket resumed at the end of the lockdown.

3. Faheem Ashraf: standing out to create a difference

As we’ve said before, all-rounders have a special place in the high-speed, high-stakes world of T20s. Although he only had one decent knock with the bat, Faheem has bowled well throughout this series, with today being his best performance by some way. He took out in-form, flowing Tim Seifert, and the great Kane Williamson before he could even get going. As a cherry on this cake, he also dismissed potent hard hitter James Neesham. It was an excellent performance by a promising young cricketer.

4. A big knock finally paying off

Unlike Mohammad Hafeez’s 99* in the last game, Mohammad Rizwan’s 89 off 59 helped Pakistan win the match. Rizwan got off to a start in the last game, but couldn’t take it to the next level. Today, though, he was the hero of the match for Pakistan. The importance of his innings becomes especially apparent when you consider the fact that other than Mohammad Hafeez, no other batsman did anything noteworthy.

5. Age is just a number for Tim Southee

When bowlers much younger were getting smashed around the park, Tim Southee kept his cool and delivered as he so often does - especially on home soil. His two wickets in two deliveries gave New Zealand one of the best chances they had to win the game, although it was perhaps too late. Moreover, he was very economical compared to others who bowled full spells, and has arguably justified his own presence in the team for the foreseeable future.

As the dust from the T20I series settles and New Zealand rejoice over the win, the Test series looms on the horizon. Once again, the Kiwis are the favourites, but as Pakistan showed today, you can never count them out completely. The first Test begins at the Bay Oval, Mount Maunganui at 3:30AM IST on Saturday, December 26.

Unfortunately for us, New Zealand won neither the toss, nor the match.

Among other predictions, Tim Southee was tied as the top wicket taker for his team with Scott Kuggeleijn, and while the teams were tied as far as fours go, Pakistan had the most sixes. Join us next time when we review the first Test between these two teams!