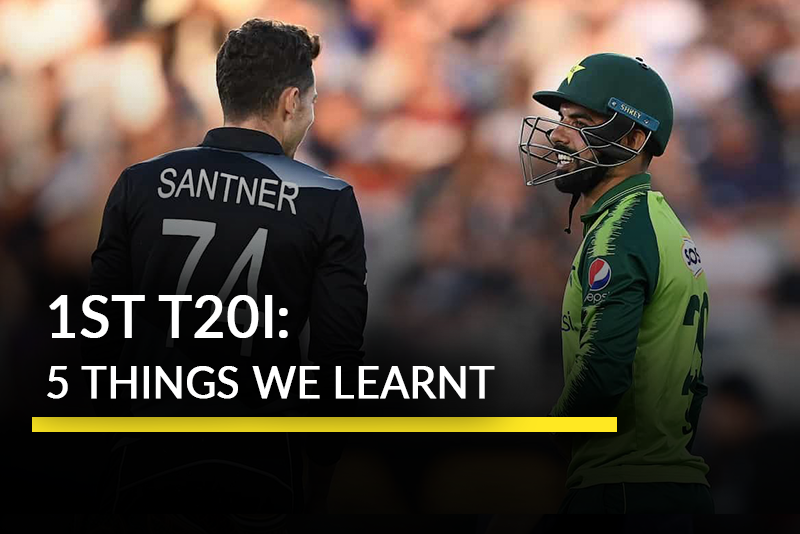 The 5-match spree we mentioned in our preview is over, and New Zealand’s emphatic win over Pakistan might just be the start of their own spree, at least when extrapolating from historic experience. Although Pakistan showed great resilience to climb out of a deep rut and post a competitive total, New Zealand were equal to the task and won more or less comfortably. From Duffy’s debut to Pakistan’s upper order collapse, there’s a lot to take from this match. Here we go with 5 talking points from the first T20I between New Zealand and Pakistan.

Early wickets are relatively common in the T20 format, with players looking to get going right off the bat, but the collapse of half the wickets before the 10 over mark is awful under any given circumstances (unless you’re Melbourne Renegades, but that’s a different story). With two ducks and a three in the top 4, it’s a miracle that Pakistan were able to put up a fight this game. It’ll also be a miracle if the Pakistani batsmen don’t get a (well-deserved) bashing from the coach.

Almost missing out on the match due to a groin strain, captain Shadab Khan basically saved Pakistan from a potentially much more terrible defeat. Although he only got 42 off 32, the inning was a much-needed stabilizing factor. He was joined by Faheem Ashraf, who added some much-needed juice to the inning with 31 off 18. Without their efforts, Pakistan may have fallen apart under 100.

Although somewhat on the expensive side, debutant Jacob Duffy was fantastic with the ball. He almost single-handedly destroyed Pakistan’s top order, dismissing four dangerous batsmen on his way to a player of the match award on his very first T20I cap for the Kiwis. Meanwhile, Scott Kuggeleijn continued his form from the CPL by picking up 3 for 27 from his 4 overs. The only problem is, New Zealand are going to have a tough time selecting which bowlers to play in the second T20I, with Trent Boult and Tim Southee coming back.

There was a time when wicket keepers were mostly lower order batsmen and could barely bat. Over the last quarter of a century, keeper-batsmen have become a critical element of the modern cricket team. Tim Seifert is a good example of this, and today he was crucial to the Kiwis’ victory. Despite losing two early wickets, he kept one end up as he was joined by first Glenn Phillips and then Mark Chapman. By the time he left the crease after making a solid 57, New Zealand were in a strong position.

Some of Pakistan’s bowlers, namely newcomers Shaheen Afridi and Haris Rauf, did very well with the ball, but it was their older players that couldn’t do anything of substance. Worst of all, their most experienced bowler, Wahab Riaz, was extremely expensive. Some more aggression at the right time was required, and Pakistan paid the ultimate price for not following through.

While New Zealand try to figure out which high-skilled, high-performing bowler to keep in the lineup, Pakistan need to address their lack of the same if they want to challenge for a reverse-sweep series win. The latter also needs to change or improve the failed top order. The second T20I between these two teams takes place at Seddon Park, Hamilton at 11:30AM IST on Sunday, December 21.

As predicted, Pakistan won the toss, but New Zealand won the match.

As for other predictions, this one went pretty terribly, with only the number of fours the Kiwis hit going our way. Join us next time when we review the second T20 between New Zealand and Pakistan!