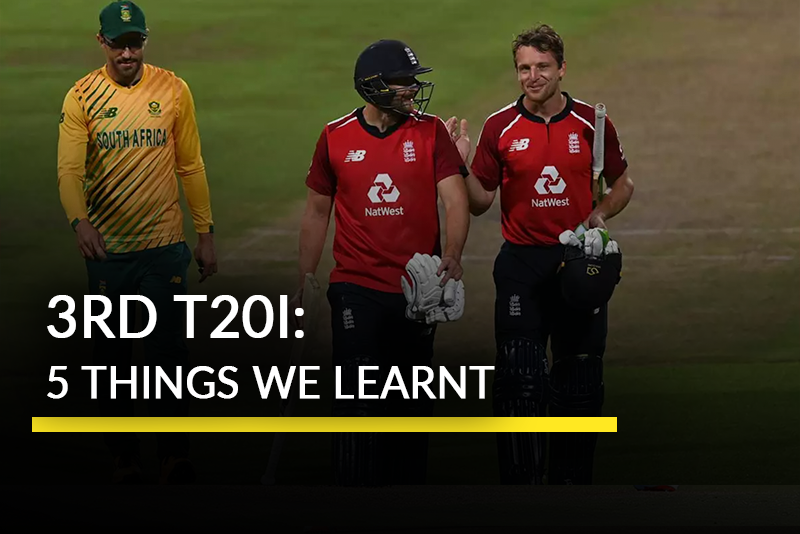 When all the players in a team aren’t pulling their weight, there’s a considerable amount of ill feelings going around. For South Africa, it’s been a series rife with disappointment, but the match they will be most disappointed by is probably the third and final one. There’s just no way that England should have chased 191 that easily. The Proteas did incorporate some changes in their lineup, but the changes either didn’t come into play, or had the opposite of the desired effect. England on the other hand, stuck with the exact same lineup and got the exact same final result. There’s a lot to unpack, so here’s 5 talking points from the third T20I between South Africa and England.

1. A tepid start with consequences

Although one can’t really blame them for starting cautiously, the relatively slow start to the South African inning by Quinton de Kock, Temba Bavuma, and Reeza Hendricks were ultimately one of the factors that resulted in England’s victory. South Africa scored a mere 70 in the first 11 overs, and a crazy 121 in the last 9. By contrast, England got 85 off their first 10. Granted, they had a target to pace themselves by, but had those early overs been taken better advantage of, the home side might have gotten a far more difficult 200+ score.

It takes a special kind of successful aggression to score 121 off 54, especially when you consider the fact that there were only 3 extras in the entire inning. When the duo of du Plessis and van der Dussen came out, the entire inning was at risk of falling apart. Not only did they recover, but they took South Africa to a potentially winning position.

3. What a few quiet overs can accomplish

With half of his balls being dots, Adil Rashid was the unspoken hero of this match. Responsible for that aforementioned tepid start by South Africa, he once again proved that in T20s, you can be the best bowler on a given day by economy rate alone. In an inning with 14 fours and 11 sixes, he only gave away one of each despite bowling a fifth of the total deliveries.

South African bowlers seem to have been inspired by, of all the people, Indian bowlers down under. Taking only 1 wicket in almost 18 overs despite an ongoing rampage, they may have one-upped the likes of Shami and Bumrah, but given the format, did much worse. George Linde was decent with his economical 26 for nought off 4, and Lungi Ngidi made amends by giving away less than 8 an over, but newcomer Lutho Sipamla had a horrible experience as he conceded a ridiculous 45 off just 16 deliveries. He wasn’t alone in getting absolutely destroyed, though - Tabraiz Shamsi gave away 57 off his four overs.

England had their own humble beginnings when Jason Roy was at the crease. When Roy got out in the fourth over, things were leaning heavily towards the hosts. Dawid Malan and Jos Buttler, however, were ready to rain on any prospective Proteas parade. Jos Buttler held one end admirably with his 67* off 46, but it was Dawid Malan with a 47-ball 99* who won the match for Morgan’s men. The man was so very focused on his game that he didn’t even realize what his score was when at 98, and took the single that won the match despite 14 balls being left for him to get a century with.

As the two teams take a day’s rest before the ODI series, they have a lot to mull over. For England, they have to change gears and pace themselves for the format’s more measured gameplay. For South Africa, they have serious problems with their lineup, but at least some solace in the knowledge that they tied the ODI series against England in February, and whitewashed Australia after that. The first ODI will be a day/night affair at the Newlands in Cape Town, and it begins at 4:30PM IST on Friday, December 4th.

South Africa took the toss, but not the match. Neither Bairstow nor de Kock were the highest scorers for their teams, but Faf du Plessis and Dawid Malan both got half centuries. Rabada and Rashid disappointed, and England narrowly beat them on the number of fours, while the number of sixes were equal. Join us next time when we review the first ODI between South Africa and England. 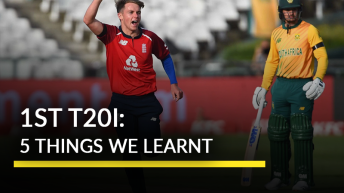