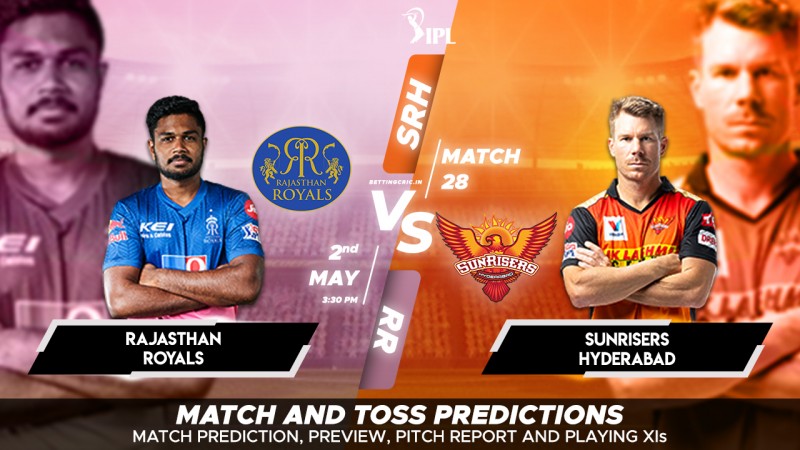 It might be the battle between the bottom two teams in the league, but it will be one that both teams will fight to the death to win. Rajasthan Royals are just two points above Sunrisers Hyderabad, and desperately need the win to catch up with the middle of the table, while their opponents are in a pit of despair and will quite realistically be pushed to the verge of a prematurely confirmed exit from the tournament if they lose. Before this high-stakes contest gets under way, let’s take a look at the two hopefuls.

Despite a decent chance, the Royals failed to beat the Indians on their last outing. Batting first, Jos Buttler (41 off 32), Sanju Samson (42 off 27), and Yashasvi Jaiswal (32 off 20) gave the team a strong start, but Shivam Dube’s uninspired, slow 35 (31) was somewhat counter-productive given the time when it came, and this caused the Royals to post a relatively disappointing 171. RR were in for more disappointment on the defense of that target, with only Chris Morris and Mustafizur striking with three wickets between them as the team lost by 7 wickets.

Sanju Samson: With some measure of consistency coming into his performances, Samson will be extremely important for RR.

Riyan Parag: Not the most likely inclusion here, but we have a gut feeling the next game will see Parag pull off something nice.

Chris Morris: Truly proving to be a gem for RR, Morris must do even better to help the embattled side.

Mustafizur Rahman: Like Morris, Mustafizur has been pretty solid - especially considering his price.

One of the most difficult things to do is to own up to your own shortcomings, but that’s exactly what David Warner had to do following their match against CSK. Batting first, Warner scored a painstaking, miserable 57 off 55 that would make even KL Rahul blush. Thankfully for them, Manish Pandey’s 61 off 46 was better, and late cameos from Kane Williamson and Kedar Jadhav helped them push a subpar score to a respectable 171. On the defense, Rashid Khan finally stood out with 3 wickets to his name, but alas, no other bowler could find any success, and the Royals lost by 7 wickets.

Jonny Bairstow: The Englishman has been hitting them far harder than any of his teammates.

Kane Williamson: If any man can turn the tides for SRH at this point, it’s Williamson.

Rashid Khan: Finally bowling as he’s expected to, Rashid will have to find even more success.

Khaleel Ahmed: After a number of quiet games, perhaps it’s time for Khaleel to rise.

Contrary to what we believed would be the case, the pitch at the Arun Jaitley Stadium is proving to be much more conducive to high totals. That’s not to say it’s a flat surface, as bowlers can find success with the right effort. Expect teams to choose to bowl first to get a better idea of the target, and first innings scores to hover around the 175 mark.

Things have cooled down a little in Delhi - that is to say, by a mere couple of degrees. Still the same slight-breeze-dry-hot combination.

Can the Royals bury the Sunrisers and make an attempt at reaching the upper half of the table? Or will the latter finally make their dysfunctional team click? Find out if our RR vs SRH predictions come true on Sunday!