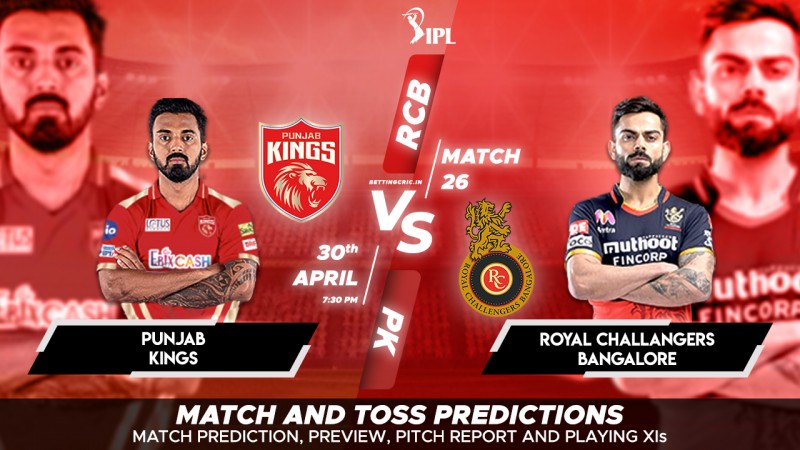 Through many errors in judgement, approach, team selection, and just basic play, Punjab Kings are now languishing near the bottom of the table. Badly in need of a win, their prospects of qualification only look realistic because many other teams have failed just as badly. Next up, they face Royal Challengers Bangalore. RCB were humbled by the Super Kings, but they picked their slack back up and are now even on points with their old nemesis. However, they still have to do a lot to even confirm their upper playoff berth, so there’s no way they’ll go easy this match. Before the two red armies start their war, let’s take a look at their recent exploits.

When you have the world’s number 1 ranked batsman in your squad and instead choose to give chance after chance to players who are clearly not performing at the top level, when you have a captain who insists on sticking to his tried-and-proven method of failure, and when you keep playing to your weaknesses, you are doomed to fail. On their last outing, the Super Kings batted first against KKR. Although the highest score on the team belonged to Mayank Agarwal (31 off 34), the fact that Chris Jordan (30 off 18) was the only player with a strike rate above 100 perfectly highlights exactly what’s wrong with PBKS this season - a captain who thinks strike rate is ‘very very overrated’ (yes I will never quite forgive him for that one). After putting a pathetic 123 on the board, decent bowling from Mohammad Shami and Moises Henriques, and a couple of other strikes gave PBKS a slice of false hope early on before the match was wrapped up neatly for a 5-wicket loss for KL Rahul’s side.

KL Rahul: The least KL Rahul can do is not to infect his whole team with his ridiculous conservative approach. Nevertheless, he’ll get runs.

Dawid Malan: If these beings of subpar intelligence finally pick the man, we believe he will do well.

Ravi Bishnoi: Although he’s not getting much of a target to defend, Bishnoi is still a raw talent ready to unleash itself.

After struggling alongside the Punjabis for the last two seasons, RCB have been the team to beat so far in this one. Although they’re now in second place by way of run rate, they have looked solid in all but one of their matches. Batting first against DC, Kohli’s men had a shaky opening, with Rajat Patidar (31 off 22) and Glenn Maxwell (25 off 20) the only players to make a reasonable contribution. However, AB de Villiers came along with a vicious 75 off 42 to propel the team to a strong 171. On the defense, Harshal Patel was once again the top wicket taker with two, and Kyle Jamieson and Mohammad Siraj also struck. Somehow, RCB were able to hold their opponents back (more like their opponents couldn’t make the best of their chances) for a skin-of-their-teeth one-run win.

AB de Villiers: You just can’t keep this guy down.

Virat Kohli: Captain Kohli’s been relatively quiet this season, and it’s about time he wakes up.

Harshal Patel: As the best weapon in RCB’s bowling arsenal, Patel needs to do better than he did last game.

Washington Sundar: Like Patel, Sundar must do better on the Motera surface.

The pitch at the Narendra Modi Stadium seems to be pretty evenly balanced between bowlers and batsmen, with a slight bias towards bowlers - especially spinners. Expect teams to choose to bowl first, and first innings scores to range between 160 and 170.

The weather in India this season has been as consistent as Faf du Plessis’ batting - very high temperatures, no rain, a slight breeze, and little humidity.

Can the Kings rekindle their comeback? Or will the Royal Challengers catch back up with the Super Kings? Find out if our PBKS vs RCB predictions come true on Friday!