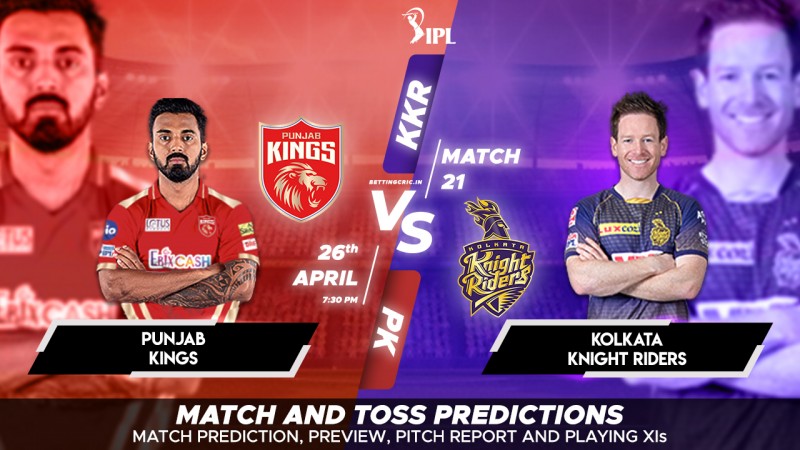 After unexpectedly trouncing Mumbai Indians, Punjab Kings are now in fifth, and looking to climb into the top half of the table. Their next objective on the road to achieving this feat is defeating bottom feeders Kolkata Knight Riders. KKR began their campaign promisingly, but since that shining opening night, things have been grim for the West Bengal side. Not only are they in last place, but their top order looks absolutely shambolic. With both teams having their respective struggles, this match will most likely be a tight contest. Before that contest begins, let’s take a look at the two sides.

It seems that given Punjab’s approach to games - which can be credited to their ridiculously set-in-his-ways captain - they can only win matches if their bowlers can restrain their opponents to a low total. In their last match, the bowlers did just that. Ravi Bishnoi and Mohammed Shami took two each, but the main plus point was four of their bowlers keeping things extremely economical, which meant that PBKS only had to chase down 131. KL Rahul’s slow but steady (as usual) 60 off 52 built the foundation for it, and Mayank Agarwal’s 25-run cameo and Chris Gayle’s 43 off 35 took PBKS the rest of the way for a 9-wicket victory.

KL Rahul: As I said before, he might get them slowly and often ineffectively, but he’ll get the runs.

Chris Gayle: Having finally gotten his mojo back, Gayle will look to cut loose.

Ravi Bishnoi: Finally making it into the playing XI, Bishnoi has shown plenty of promise.

Arshdeep Singh: After a relatively poor performance, Arshdeep must step back up for his team.

With captain Eoin Morgan continuing to show poor form along with the majority of the KKR lineup, KKR will need a miracle to qualify for the playoffs. In their previous match, Rahul Tripathi (36 off 26) was the only batter to crack 30, and with 22 (25) from Nitish Rana and 25 (24) from Dinesh Karthik, KKR could only serve up 133 for Rajasthan Royals to chase. On the bowling end, Varun Chakravarthy picked up a couple of wickets and Shivam Mavi took one while keeping things tight, but they couldn’t stop RR from getting to their target with 7 deliveries to spare.

Shubman Gill: In such a time of crisis, Gill must prove his worth in order to keep his position not only in KKR, but in the Indian XI.

Rahul Tripathi: Like Gill, Tripathi must help his team come out of this rut with something out of the box.

Varun Chakravarthy: the off-spinner is KKR’s best bet as far as bowling goes.

Pat Cummins: He might be world class for his national team, but Cummins has nevertheless been struggling at this IPL.

After Chennai and Mumbai, the tournament now heads to the Narendra Modi Stadium in Motera, Ahmedabad. The pitch here is definitely one for the bowlers, although it was made slightly more batting-friendly after complaints by the visiting England team. Expect spinners to enjoy the surface nevertheless, and teams to choose to field first upon winning the toss. Predicted first innings total: 150-160.

With temperatures in the greater 30s well into the evening and barely moving, bone-dry air, playing in Ahmedabad at this time of year will be a punishing experience for players. The only good thing for the sake of cricket is that there is absolutely no chance of rain.

Can the Kings edge out their opponents for a possible foray into the top half of the table? Or will the Knight Riders finally get their first win since their very first match? Find out if our PBKS vs KKR predictions come true on Monday!