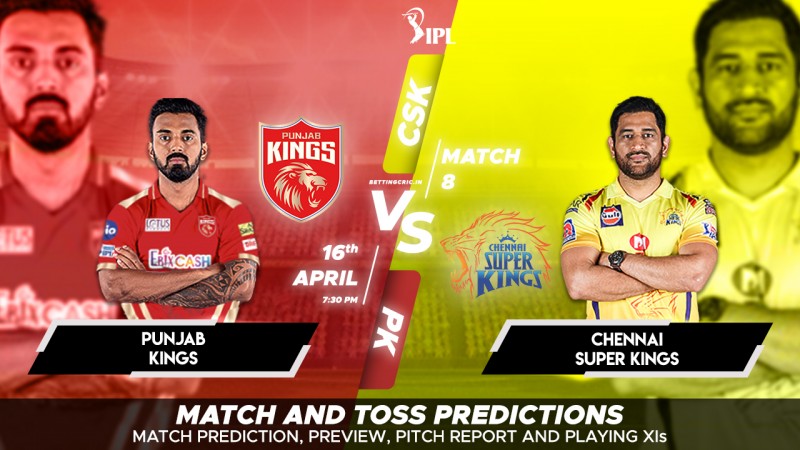 There has never been a rivalry between Chennai Super Kings and Punjab Kings - despite both having ‘Kings’ in their name - mainly due to the two teams having had very differing amounts of success. However, when the two teams meet this year, the Kings will be out for revenge. Last year, the Super Kings defeated them in the last match of the season for both teams, preventing them from qualifying despite themselves having long been out of contention. On top of that, KL Rahul has plenty to prove in his quest to establish himself as Dhoni’s heir apparent for the keeping gloves of Team India. With more than just points on the line, this one promises to be a cracker of a match. Before the coin gets air time, let’s take a look at the two teams.

Given how their previous season went, PBKS will be happy to have started with a win. Put into bat, KL Rahul’s captain’s knock of 91 off 50 was just what the doctor ordered, and with Chris Gayle’s 40 (28) and Deepak Hooda’s explosive 64 (28), PBKS were able to put up a frightening 221. On the defense, it was young Arshdeep Singh who took charge, picking up 3 important wickets for just 35 runs, while Mohammad Shami complemented him well with another two wickets for 32. These two performances counterbalanced the runs given away by the other bowlers, and PBKS were able to seal a narrow - but welcome - 4-run win.

Mayank Agarwal: Mayank couldn’t do much in the first match, but we expect him to shine in the second.

Deepak Hooda: In excellent form, Hooda’s aggression will come in handy for the Punjabis.

Arshdeep Singh: The hero of the first match will be back to help out his team again.

Mohammad Shami: Punjab’s ol’ faithful is still one of their most effective weapons.

Despite initially looking better than expected, CSK failed to make the best of their opportunity against the Delhi Capitals. Batting first, they lost two early wickets, but Moeen Ali (36 off 24) and the returned Suresh Raina (54 off 36) gave the innings the foundation it needed, with cameos from Ambati Rayudu, Ravindra Jadeja, and especially Sam Curran taking the side to a solid 188. On the defense, however, their bowlers proved all but useless. It took them 13.3 overs to find the first wicket, and although Shardul Thakur managed to take two, he was slapped around the park. The only economical bowler was Dwayne Bravo, who also took a wicket, but couldn’t prevent CSK from losing by 7 wickets with 8 deliveries to go.

Faf du Plessis: Although he failed in the first innings, du Plessis has done more than enough to justify his inclusion here.

Suresh Raina: Raina seems to be intent upon taking back his title as the highest scorer in IPL from Virat Kohli.

Deepak Chahar: Another bowler who did well, but was unlucky in terms of wickets.

Big hitters will be happy that this match is in Mumbai, because the pitch there is looking to be much better for batting than its Chennai counterpart. Expect fast bowlers to try to exploit the bounce, but batsmen to come out on top more often than not. Teams playing the first innings should aim for scores starting with a 2.

With no clouds and no obvious elemental impediment to the game, Friday should be another fantastic day for IPL.

Can the Kings outplay their ‘super’ southern counterparts? Or will the men in yellow defy their poor run of form and come out on top? Find out if our PBKS vs CSK predictions come true on Friday!