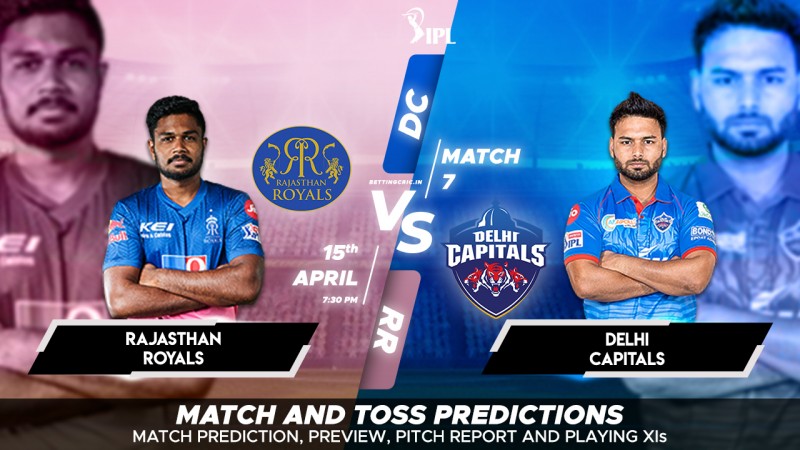 Since their watershed season last year, it is no longer an odd thing for the Delhi Capitals to be at the top of the table. However, this season has only begun, so there will be plenty of changes to that order before the league stage is over. The Capitals may have started with a win, but not all teams were as lucky. The Rajasthan Royals played the Punjab Kings in the kind of thriller that has become synonymous with those two teams meeting, and although they fought bravely, they fell just short. Now, they’ll be looking to get off the mark by defeating a team they haven’t beaten in their last five encounters - but they’ll have to do so without the important Ben Stokes, who has been ruled out of the rest of the tournament due to a broken finger. The Capitals on the other hand will look to continue their winning ways and retain the lead they lost last season. Before the two sides head out to play, let’s take a look at how they’re doing.

Last year, they won the same fixture because of a spectacular singular performance, but this year that performance, although much more impactful, fell just short of delivering the goods. Choosing to bowl first, the Royals used a ridiculous 8 different bowlers, with young Chetan Sakariya being the pick of the lot with 3 scalps to his name. Despite Chris Morris taking 2 more and Riyan Parag picking up one, every other bowler (Morris included) conceded double figures per over, and RR found themselves staring at 221. On the chase, the Royals kept losing wickets at regular intervals, but the heroics of Sanju Samson (119 off 63) along with some cameos kept them in contention. However, after refusing a single off the penultimate delivery of the match, Samson couldn’t hit the six required for a win or the 4 needed for a Super Over, with his team losing by a mere 4 runs.

Sanju Samson: Although a little headstrong for not taking that single, Samson was still nothing short of incredible.

Jos Buttler: After a poor show, the English batsman will be keen on making amends.

Chetan Sakariya: The young man was excellent with the ball, and we hope to see more such bowling from him.

Chris Morris: Morris did well in the first game, but needs to check his economy rate.

Halfway through the Capitals’ match against CSK, one would have thought they had let MS Dhoni’s side get away with quite a lot, but DC had more to say. Bowling first, Avesh Khan and Chris Woakes both took two each and kept things very tidy, but the others weren’t as solid, so their opponents piled up a considerable 188. In response, openers Prithvi Shaw and Shikhar Dhawan went ballistic, scoring 72 (38) and 85 (54) respectively to all but take DC to their destination. Soon, the Capitals were able to take the match with 7 wickets and 8 deliveries to spare.

Rishabh Pant: Although he hardly got the chance to play in the last match, Pant will very likely get the chance to not only bat, but flex his batting skills.

Avesh Khan: The local talent has plenty of potential to challenge batsmen far more experienced than him.

Kagiso Rabada: This could also be Anrich Nortje, but one of the South Africans will feature and be effective.

The Wankhede Stadium is a veritable batting paradise, with runs on offer for any in-form batsman. Fast bowlers will enjoy the bounce, but there’s little lateral movement to be found. Teams can choose to either bat or bowl, but whoever bats first will have to aim for 200+, if recent matches are any metric to go by.

Although the temperature will be on the hot side, all other weather variables will be conducive to uninterrupted, unadulterated cricketing action.

Can the Royals get off the mark against a team they haven’t beaten in quite a while? Or will the Capitals continue to dominate their regional foes? Find out if our RR vs DC predictions come true on Thursday!