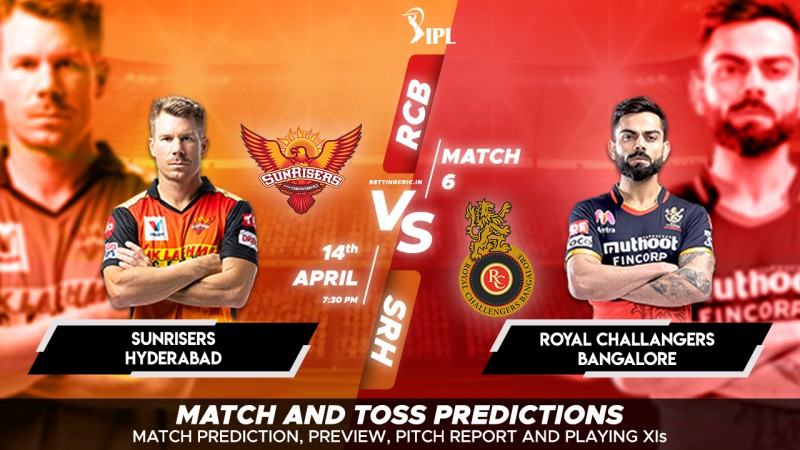 Third and fourth last year, Sunrisers Hyderabad had knocked Royal Challengers Bangalore out of the running before themselves getting eliminated. Fast forward a few months, the Royal Challengers will now be looking to take revenge. Looking much stronger than the Sunrisers, RCB managed to beat the reigning champions by the skin of their teeth, and are at the bottom of the top half of the table. They are in good form and good spirits. SRH, however, lost their first game and are just above last place, but will have the highly important Kane Williamson back. Before the captains bump elbows, let’s take a look at the two teams.

It seems as though every season, the Sunrisers end up losing some matches by small margins because they don’t have Kane Williamson in the lineup. Choosing to field first, Rashid Khan and Mohammad Nabi both took two - albeit at different economy rates - and with help from two others, managed to stunt KKR’s innings after they looked to post 200+ at one stage. With 188 to get, SRH lost their openers early, but Manish Pande’s 61 off 44 and Jonny Bairstow’s 55 off 40 almost got them there. After those two left, however, nobody else could do much, and the Sunrisers fell 10 runs short.

Kane Williamson: The Kiwi captain will be keen on getting his run tally off to a flying start.

Manish Pandey: After a solid knock in the first match, Pandey will be looking for more.

Thangarasu Natarajan: Although not the most effective so far, Natarajan has tremendous potential.

Rashid Khan: The king of spin will be back to do more damage.

Although one match is hardly a sign of things to come, RCB’s morale should be at a considerable high after finally defeating their demons to take out their bogey team. Bowling first, it took a while for them to cause any damage, but Harshal Patel gave the performance of a lifetime with figures of 4-0-27-5 to hamstring MI’s innings. Chasing 160, Virat Kohli opened with a steady 33 off 29, and with Glenn Maxwell’s 39 off 28 and AB de Villiers’ 48 from 27, RCB were able to scrape through on the very last ball of the match with 2 wickets in hand.

Virat Kohli: The RCB captain wasn’t at his best in the first game, but he is capable of a lot more.

AB de Villiers: The Proteas powerhouse once again saved his team when they needed him the most.

Harshal Patel: When a bowler takes a 5-for in a T20, you know they’re special.

Mohammed Siraj: It might take him a bit of time to get set after recovering from a lengthy injury, but Siraj has the skills and smarts to excel.

As the Chennai pitch showed the other day, there’s plenty on it for batsmen in form, although spinners will no doubt have the final say if they themselves are in just as good a touch. Expect teams to want to field first, with teams batting first aiming for 170+.

Once again, the chances of rain in Chennai will dwindle as the day progresses, and with pleasant weather variables all around, it should be a great night for some bat and ball.

Can the Sunrisers get off the mark on their second attempt? Or will the Royal Challengers continue their winning ways? Find out if our SRH vs RCB predictions come true on Wednesday!