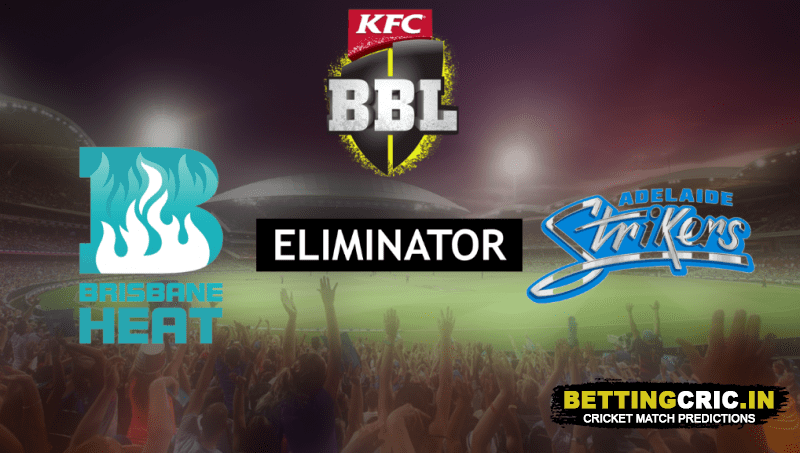 Betting odds for BH v AS

After an incredible last day of the league stage, we now kick off the playoff stage of BBL10 with the Brisbane Heat facing off against the Adelaide Strikers in the Eliminator Final. The two teams were separated by a solitary point after the Strikers failed to win their last match and the Heat managed to do so. The Strikers may have won both the encounters between these teams in the group stage, but this is the Eliminator, and the stakes are higher than ever. Any team can beat any team, and if some players do not leave the tournament to attend the Abu Dhabi T10 Cricket League, this one should be an evenly balanced, tight affair. Before the second part of BBL10s saga begins, let’s take a look at the two characters.

It’s been far from a dream run for the Heat, but given how poorly they started, they will take this qualification any day. In fact, it was only a loss for both the Hobart Hurricanes and Adelaide Strikers coupled with a (admittedly well played) win for themselves in the very last round of games that has allowed them this privilege. In their last match, they batted first against the Perth Scorchers, and despite losing an early wicket, Chris Lynn (51 off 25) and Marnus Labuschagne (46 off 38) batted superbly to give the team a great head start. This was consolidated by Lewis Gregory’s fast 36 which got the Heat’s score to a commanding 181. On the defense, it was Mitchell Swepson’s highly economical figures of 4-0-20-2 and Labuschagne’s triple haul that saw the team successfully defend their total for a narrow 6-run win.

Chris Lynn: The big man played a big role in his team’s journey to the qualifier, and must do even more now that they’re here.

Marnus Labuschagne: What can this guy not do, honestly? Absolutely brilliant cricketer in every way.

Mark Steketee: He may not have struck last match, but he’s the leading wicket-taker for the Heat and can be devastating when in form.

Mitchell Swepson: The leggie had arguably the best figures for his team last time around.

Barely squeezing through to the playoffs based on net run rate, the Strikers have to count themselves lucky that the Hurricanes only managed to take one point from their match against the Renegades, and that the Stars lost outright to the Sixers. In their last match, the Strikers were asked to bat by the Thunder after the match was reduced to 14 overs per side by rain. Wickets kept tumbling on one side, but Jake Weatherald played the knock of his life to rage to 80 off just 47, with only Jonathan Wells providing some support with 21. Setting up an inadequate score of 115, they then failed completely with the ball. Only Daniel Worrall managed to pick up a wicket as everyone else just leaked runs with nothing in return, and the team lost by 9 wickets with 11 deliveries to go.

Travis Head: After an awful performance in the last match of the group stage, Head will have to bounce back and lead his team from the front in order to reach the next stage.

Jake Weatherald: An underrated batsman, Weatherald has time and again proven his worth for his team.

Daniel Worrall: The only person to take a wicket in the last match will probably strike again in this one.

Danny Briggs: The Strikers might be missing Rashid Khan, but Briggs is all they’ll get - and we don’t think he’s a bad replacement.

BH vs AS weather conditions and pitch report

It’s going to be a cloudy and windy day with a slight chance of rain, but thankfully for fans of these two teams, that chance should be minimal throughout the duration of the match. The temperature will be on the warm side, and the winds might make high catches difficult to judge.

As was seen in the recent much-talked-about Gabba Test, both fast bowlers and spinners had the bigger say on this pitch. That being said, batsmen who can get used to the surface can also do well. Expect totals of 165-170 to be hard to chase down.

Can the Heat blaze their way into the Knock-Out Final? Or will the Strikers squeeze through once again as they seem to love doing? Find out if our Brisbane Heat versus Adelaide Strikers predictions come true on Friday! 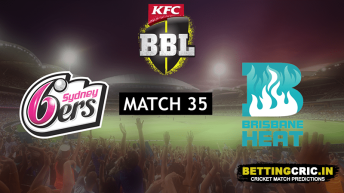 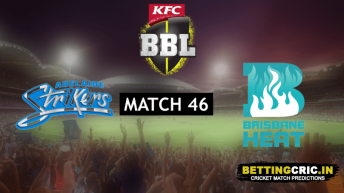 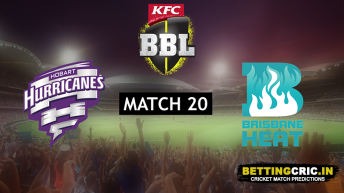