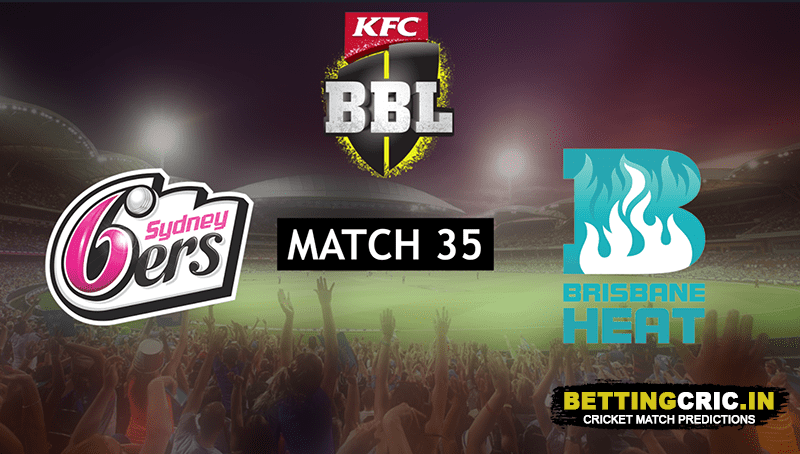 Whoever it was that came up with the idea of Bash Boost points, fans of the Sydney Sixers will be thankful to them. Despite having won 5 matches, the Sixers are only one point behind league leaders Sydney Thunder as they have taken 6 of the 8 Bash Boost points available to them so far. Next up, they will be looking for revenge against the Brisbane Heat - a team that has already beaten the Sixers this season and become the reason the defending champions aren’t in the lead. After a poor start, the Heat have made a comeback into the series with 3 consecutive wins, and they will be looking to make it 4 to further cement their playoff hopes. Before we hear the thwacks and cracks of leather on willow, let’s take a look at the two teams.

It’s not easy to be near the top of the table when many of your most important players are out on international duty. Despite having lost two matches, the Sixers were riding high until they were absolutely bashed by a resurgent Perth Scorchers. After winning the toss and choosing to field first, SS had an economical start to the match, but they couldn’t continue that way. Steve O’Keefe and Lloyd Pope were the only two bowlers to strike, and they took two each. Everyone else was expensive and ineffective. Things slid further down when they started chasing the Scorchers’ 183, with wickets falling at regular intervals. Jack Edwards’ 44 was the only score even worth mentioning, and after a thoroughly forgettable bit of batting, the Sixers’ innings was killed off at 97 after 16.4 overs.

From sulking winless at the bottom, the Heat have come back to be hot on the heels of the teams that lead the pack. They are the only team to have beaten both the current top two teams, and are looking genuinely scary. Their last win which came against the Melbourne Stars, though, was more a product of luck than skill. Batting first on a rainy day at the Carrara Oval, the Heat got off to a fantastic start and raced to 115 for 3 in just 10 overs thanks to Max Bryant’s 31, Chris Lynn’s 48, and Joe Burns’ 22. At the time, it was going to be a 17-over game, but further rain stopped their innings and shortened the match to 10 overs per side. DLS calculations, ridiculously complicated as they are, got them defending 129. Despite a few scares, Mark Steketee’s 3-for and Jack Wildermuth’s economical bowling got them through for a 18-run win.

There’s a small chance for rain coming down from the partial cloud cover, but it shouldn’t last too long if it at all happens. Other than that, the temperature, wind, and humidity all point to a very pleasant, enjoyable cricketing experience.

Although some of the spinners were whacked around the field somewhat last match, that was because of the desperate nature of the match. Things should come back to normal at the Carrara, with batsmen doing moderately well, spinners and enjoying the turn, and fast bowlers enjoying some movement as well.

Can the Sixers get an important win that will help them stay in the top bracket? Or will the Heat burn it up to push themselves up into a stronger position? Find out if our Sydney Sixers vs Brisbane Heat predictions come true on Sunday!