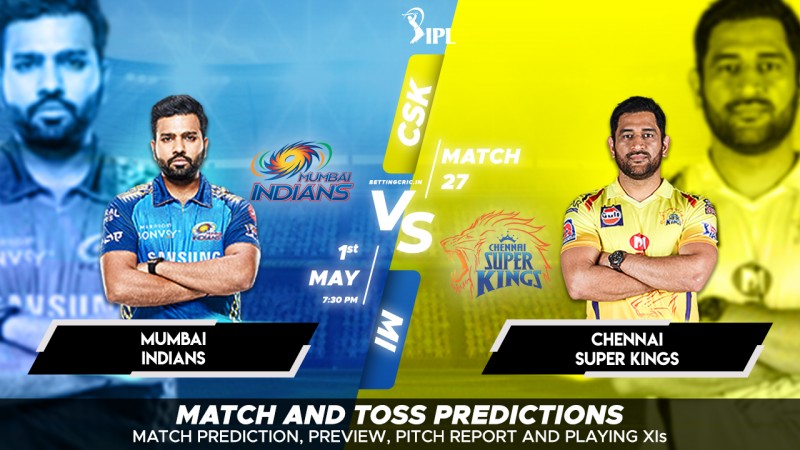 With matches in Chennai coming to an end for now, Mumbai Indians immediately look rejuvenated, picking up a comprehensive victory against Rajasthan Royals to confirm their 4th place slot for now. Next up, they will face league leaders - and arch-nemesis - Chennai Super Kings. CSK have won 5 matches in a row and are now at the top of the table with no signs of stopping. Given how the teams are positioned, this game could play a large role in determining the final state of the table, and before these two teams lock horns as they have for years, let’s take a look at how they’ve been doing.

After winning their first match at a new venue, Rohit Sharma and his men will be hoping to turn it into the kind of fortress the Wankhede typically is to them. Bowling first against RR, Rahul Chahar may have taken the most wickets with two, but it was Jasprit Bumrah’s ridiculous figures of 4-0-15-1 that saw them tie their opponents down for a reasonable 171. On the chase, Quinton de Kock finally rose to the occasion with a strong 70* off 50, and with good support from Krunal Pandya (39 off 26), MI sealed a 7-wicket win with 9 deliveries to go.

Quinton de Kock: Now that the hard-hitting South African has finally found his groove, we expect him to go haywire as usual.

Kieron Pollard: Although there weren’t enough runs left for him to do much last game, we suspect Pollard will be involved in some bludgeoning.

Jasprit Bumrah: It feels like local bowlers are outdoing their foreign counterparts on just about every team in this edition of the IPL.

Okay, I admit it - I regret having predicted that CSK would come last this season. They have made an absolutely fantastic turnaround, and look like the strongest, most consistent team of the lot. In their previous match, although Lungi Ngidi’s two-for and Sam Curran’s singular strike were the only wickets they got, they were able to keep the Sunrisers from building up a massive score (or rather, the Sunrisers themselves were unable to do so). Chasing 171 like MI also chased in their last match, Ruturaj Gaikwad’s 75 off 44 and Faf du Plessis’ 56 off 38 all but took CSK to the target, with the job being finished off with 7 wickets and 9 deliveries in hand - once again, just like MI.

Ruturaj Gaikwad: The young batter seems to be coming into his own, and is repaying Dhoni’s continued faith in him.

Faf du Plessis: The 36-year-old Protea shows no signs of slowing down.

Ravindra Jadeja: Jadeja’s exploits with the ball are perhaps more often more important for his team than his turns with the bat.

Lungi Ngidi: Another Protea who has been impressive since his return to CSK.

The pitch at the Arun Jaitley Stadium has proven to be somewhat better than anticipated, and I’m sure all cricket fans are all the more grateful for it after the low-scoring bowler-favouring matches in Chennai. Expect a relatively even contest between bat and ball, and scores of around 170 (or should I say 171?) in the first innings.

I haven’t even checked the weather forecast for Delhi yet, but I already predict it will be very hot and dry with a slight breeze blowing. After checking, I see that I am right on the money.

Can the Indians take down the league leaders to close the gap between the two? Or will the Super Kings continue their imperious run? Find out if our MI vs CSK predictions come true on Saturday!