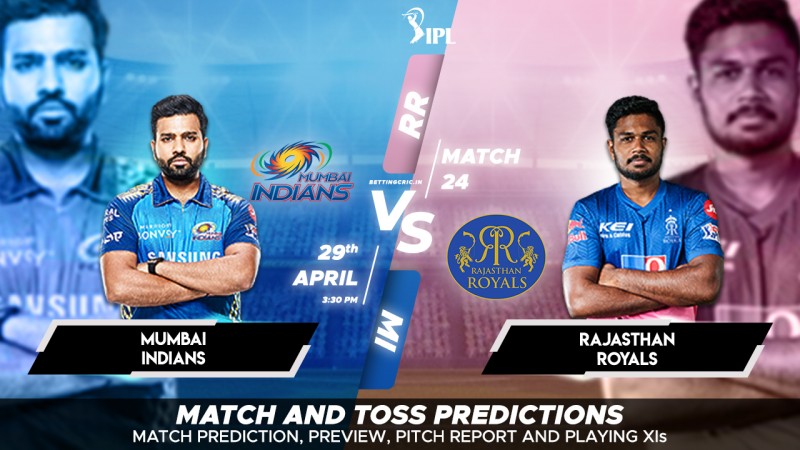 Things aren’t the greatest in the Mumbai Indians camp. They are now 4 points below the team in 3rd place, and although they have a game in hand, this is the lowest point they’ve been at this far into the season since 2019. Desperate to do better, they will now face Rajasthan Royals hoping for a change of fortunes. The Royals themselves are just above last place thanks to an important win in their last match. They, too, will be hungry for points. Before the two blues take to the field for a clash of azure, let’s take a look at how they’ve done recently.

After floundering extensively in Chennai, the Indians will be looking forward to shifting to Motera.

Batting first against Punjab Kings, Rohit Sharma played an uncharacteristically slow innings to hold the fort with 63 off 52, but apart from Suryakumar Yadav with 33 off 27, he got absolutely no support. Having to defend only 131 was always going to be a tough task, but the fact that only Rahul Chahar managed to get a wicket eliminated whatever chances MI had, with the team losing by 9 wickets with 2.2 overs to go.

Rohit Sharma: If not much else, Rohit has been in better form than his teammates.

Rahul Chahar: The most consistent bowler for Mumbai by far.

Trent Boult: He may have been bashed around last match, but Boult is still a top tier bowler by any metric.

With Sanju Samson seemingly enjoying his new 1-down position, and an important win against KKR in the bag, the Royals will now be a little higher on confidence despite having lost the majority of their matches. Bowling first against Kolkata Knight Riders, Chris Morris proved his worth with four strikes, and with help from Mustafizur Rahman and Jaydev Unadkat, managed to squeeze their opponents to a mere 133. Although the chase didn’t go ideally, Sanju Samson’s 42 off 41 and small contributions from Yashasvi Jaiswal, Shivam Dube, and David Miller pulled RR through with 6 wickets and 7 deliveries to spare.

Sanju Samson: The Rajasthan captain’s return to form will be extremely important for his team moving forward.

David Miller: Like Samson, Miller is an extremely important cog in the RR machine.

Mustafizur Rahman: The Fizz may not strike as much as some of the other bowlers, but he has been terrific nevertheless.

Chris Morris: The South African all-rounder has remained undaunted in the face of much criticism and ridicule, and has been doing superbly.

The pitch at the Arun Jaitley Stadium is yet another that favours bowlers - especially spinners. Batsmen will struggle to time the ball, and teams winning the toss will choose to bowl first to get an idea of their target. Expect first innings scores of around 150-160.

Searing heat, no rain, and very low humidity will be accompanied by a slight breeze this Thursday afternoon in Delhi.

Can the Indians pick up their pace and catch up with the top teams? Or will the Royals push them into the second half of the table for the first time at this point of the season in 3 years? Find out if our MI vs RR predictions come true on Thursday!