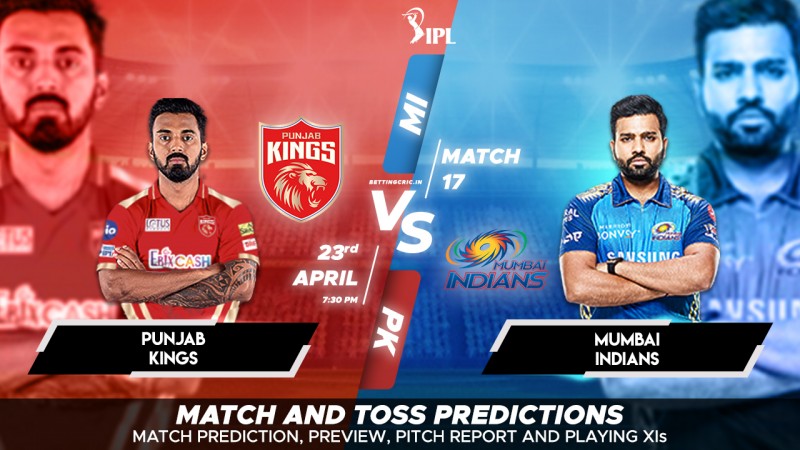 Things aren’t going well for Punjab Kings. They were at the top of the table after the first round of matches, but after three straight losses now find themselves at the opposite end with no reprieve in sight. That situation might just worsen now with their next match against reigning champions Mumbai Indians. Mumbai themselves aren’t exactly having a stellar title defense, with the Chennai surface not suiting their play style. They are down in 4th place, and are desperate to get some more wins. Before the floodlights shine on the MA Chidambaram, let’s take a look at the two sides.

With their batsmen flickering between awful and excellent, Punjab may have had a chance, but their bowlers have been subpar at best as of late. The Kings should, at least, bring Dawid Malan in for the underperforming (or not at all performing) Nicholas Pooran. Batting first against SRH, Shahrukh Khan and Deepak Hooda were the only two batsmen with strike rates above 100, and since the former scored 22 and the latter 13, it was always going to be a terrible outcome for the Kings. Defending only an awful 120, their bowlers were mostly economical, but only Fabian Allen managed to take a wicket as they lost by a whopping 9 wickets.

KL Rahul: KL must step up like last time, except with strike rate in mind this time.

Deepak Hooda: Disappearing after one good innings, Hooda needs to be more consistent for the sake of his team.

Fabian Allen: The West Indian all-rounder showed that he is indeed worth selecting with a solid turn with the ball.

After an entire year of dominating Delhi Capitals, the Indians were finally beaten by them, mainly due to a terrible batting performance. They really need to put Ishan Kishan in the keeping position and bring back Chris Lynn as a batsman. Choosing to bat first, Rohit Sharma gave the team a good start with 44 off 30, supported by Suryakumar Yadav with a 24-run cameo off 15 balls, but after that, no one could pitch in with a meaningful innings, and MI could only get to a thoroughly subpar 137. Their defense wasn’t much better, as despite being economical, the bowlers just couldn’t get enough dismissals, with Jayant Yadav being the pick of the lot for being the most economical wicket-taker. In the end, the Indians lost by 6 wickets.

Ishan Kishan: Kishan must shake off his poor form and rise back up.

Kieron Pollard: like most Mumbai batters, Pollard hasn’t been able to do much with the bat apart from one decent cameo.

Rahul Chahar: Still the best bowler in Mumbai this season.

Jasprit Bumrah: Bumrah is definitely not enjoying the Chennai pitch, but he must overcome that obstacle and put in a performance worthy of his name.

The battle between Punjab and Mumbai will take place on the difficult surface of Chennai’s MA Chidambaram Stadium, where bowlers - especially spinners - find plenty of support, and batsmen struggle to time the ball. Expect the toss winner to choose to bowl, and first batters to aim for 160+.

It’s going to be a hot night in Chennai where these two are about to have a wild night, with a nice breeze and decent humidity to accompany the experience.

Can the Kings take out the Indians to finally get their second win? Or will the Indians get back into the top 3 with another triumph? Find out if our PBKS vs MI predictions come true on Friday!