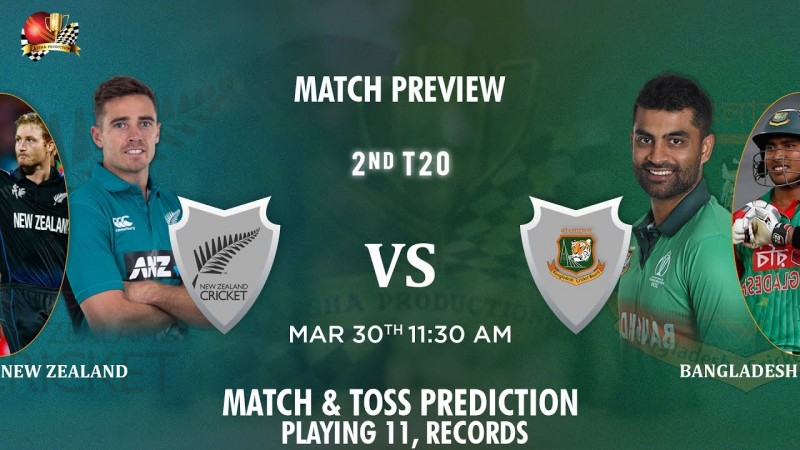 It was yet another one-sided affair as New Zealand took on Bangladesh in the first of three T20s between them. The saddest part was the fact that Bangladesh didn’t even look like they were trying to put up a fight - they just seemed lost and hopeless. The second match, perhaps, will jolt them to their senses and have them do better - just as they did in the 2nd ODI. The Kiwis on the other hand will be keen on closing out the series and crushing Bangladesh’s remaining dregs of morale. Before the umpires head out onto the field, let’s take a look at the two teams.

The Black Caps look to be in excellent shape in preparation for the T20 World Cup, with bowlers and batsmen both doing well. In the last match, despite losing Finn Allen on his very first ball, the amazing Devon Conway set the tone with a fantastic 92* off 52, and with Martin Guptill’s supportive 35 off 27 and Will Young’s belligerent 53 off 30, the Kiwis managed to take their score to a massive 210. On the defense, it was surprisingly Ish Sodhi - and not any of the quicks - who picked up the most wickets with 4 to his name, while Lockie Ferguson also took two to seal Bangladesh’s fate with the Black Caps defeating them by 66 runs.

Devon Conway: Given the man’s form, it’s impossible to keep him out of such a list.

Glenn Phillips: Coming in with a cameo last game, Phillips might get a better chance with the bat this time.

Lockie Ferguson: After taking two in the previous match, Ferguson has remembered the taste of blood.

Tim Southee: The captain himself will step up and look for more strikes.

Bangladesh’s problems don’t look like a matter of skill as much as they look like a lack of discipline, temperament, and training. They aren’t just being outplayed - they are being outclassed outright, looking like amateurs at a professional game. Bowling first, debutant Nasum Ahmed picked up two important wickets and kept things tidy, and even the inexperienced Mahedi Hasan took a wicket, but the only senior bowler picked for the match not only failed, but got thrashed alongside the others. Chasing a gargantuan 210, it was going to be a big ask for Bangladesh anyway, and losing wickets at regular intervals only compounded such fears. Afif Hossain’s 45 off 33 and Mohammad Saifuddin’s 34* off 34 were ineffective as Bangladesh could only reach a measly 144.

Mohammad Naim: Seemingly less affected by pressure, Naim will have to prove his worth to the team in this trial by fire.

Mohammad Mithun: Mithun did well in one of the ODIs, and he must do the same in the T20s.

Nasum Ahmed: Excellent with the ball on his first outing, Nasum must do even better if his team are to win.

Rubel Hossain: Now, this could be Shoriful again, but we hope Rubel is chosen to replace him as we think he’ll be more effective.

Like a typical New Zealand pitch, the surface at McLean Park will assist fast bowlers with plenty of speed and bounce along with early movement. However, the pitch will also cause the ball to come on to the bat quickly, and with shorter boundaries, runs won’t be hard to get. Expect teams batting first to aim for at least 180.

A high chance of rain awaits the teams in Napier, with high chances of scattered thunderstorms in the area. Expect DLS to possibly play a part in the proceedings. Other than that, the weather should be much warmer and nicer than it was in the other regions, making things better for Bangladesh.

Can New Zealand seal the series as they have so many times before? Or will the Bengalis pull something out of the bag? Find out if our New Zealand vs Bangladesh 2nd T20 predictions come true on Tuesday! 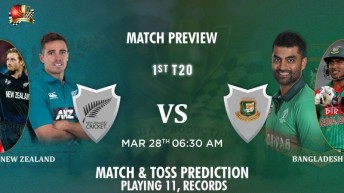