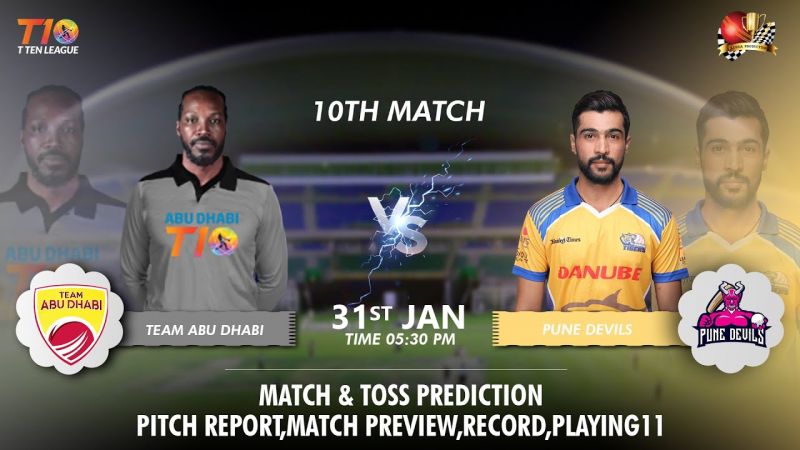 After the Pune Devils’ demise to the Qalandars, Team Abu Dhabi have now fallen prey to the same team, and while the Devils had a win under their belts to provide a bit of a cushion, Abu Dhabi do not. In 3rd and 4th place in Group B, A win for the Pune Devils would put them above the Deccan Gladiators if the latter loses their match against the Qalandars later on, but if the Gladiators manage to win, the Devils will have to make amends in the Super League round. Team Abu Dhabi can also reach second place, but they will have to get a massive win to do so, while the Qalandars will also have to win by some margin against the Gladiators. If that sounds confusing, that’s because it is, a little. Long story short, both teams will be desperate for a win for the sake of better seeding, and before the bell goes off to get these two teams to start wrestling, let’s get a closer look at them.

After winning their first match, the Devils may have hoped to get the top berth in their group, but a batting masterclass by the Qalandars has left them struggling. In their last match, Tom Kohler-Cadmore started well for them with a strong 54 off 28, but the others couldn’t do much, and Darwish Rasooli’s 24-ball 39 was much too slow for T10 cricket. Defending a mediocre 107, The Devils bowlers couldn’t come up with inspiring performances, with the highly expensive Munis Ansari being the only one to take a wicket, and they lost the match by 9 wickets with almost 3 overs still to go. To add insult to injury, this loss devastated their net run rate.

Chadwick Walton: The West Indian should be moved up the order in order for him to have the chance to inflict maximum damage upon the bowlers.

Munis Ansari: Still the top wicket-taker for the Devils, Ansari must step up and use his experience to pick up some more.

Karan KC: The Nepali fast bowler needs to be trusted more by his teammates, as he clearly has plenty of potential.

Team Abu Dhabi might have the players to challenge powerful teams, but that’s no good when those players aren’t performing up to par. In their previous match, they were up against the Qalandars. Batting first, the only person who looked like he was playing a T10 match was Joe Clarke, who made 34 from 13. Everyone else looked to either be playing T20 or an ODI, resulting in the team settling at a mere 100 off their 10 overs. When it came time to defend their total, only Naveen-ul-Haq managed to pick up a wicket, with no one else so much as being economical, and they lost the match by 9 wickets early in the 9th over.

Luke Wright: We’re not sure why Wright is playing so far down the order, but he needs to come in early and hit as many as he can out of the park.

Joe Clarke: After his terrific display last game, Clarke should also be promoted up the order so he can fire a few big ones.

Naveen-ul-Haq: One of many Afghani talents making the rounds around the world’s numerous limited overs franchises, Naveen-ul-Haq will have to be better than usual if his team is to qualify.

Rohan Mustafa: He may not have picked up a wicket in the last game, but there were glimpses of greatness that can come of use.

As usual, the winter desert will be easy on the body with comfortable temperatures and moderate humidity. There is a chance for slight drizzles earlier, but that won’t affect the match. The only thing that might is a strong wind that can alter the trajectory of high shots.

T10 cricket seems to be more about which batsman is currently connecting bat with ball than any real strategy by the bowlers, so it’s hard to predict any kind of approximate scores based on the pitch. What we can say for sure is that the surface is pretty good for bowlers and batsmen alike.

Can the Devils manage to trump their opponents in the latter’s namesake city? Or will Team Abu Dhabi finally wake up and put up a solid performance? Find out if our Pune Devils versus Team Abu Dhabi predictions come true on Sunday! 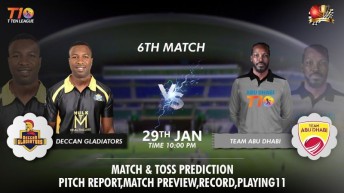 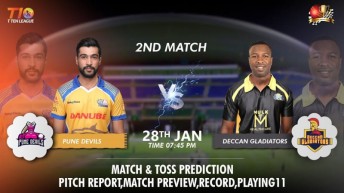