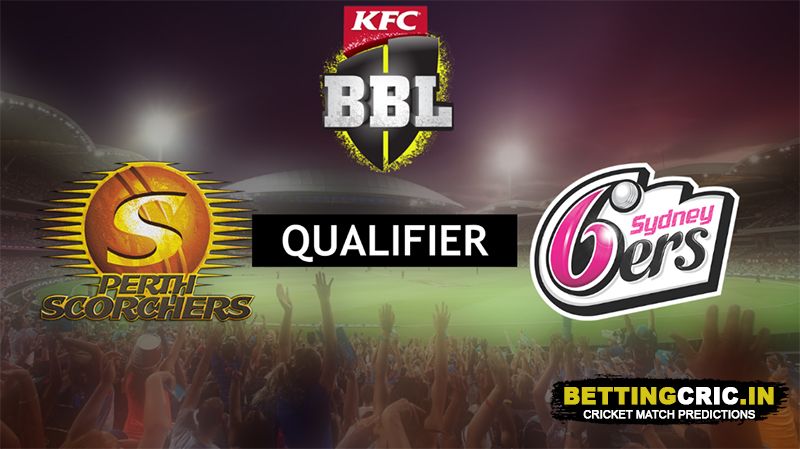 Bet on PS Bet on SS
30.01.2021, 13:45 IST
Manuka Oval, Canberra
In the race for top spot between the two strongest teams in the BBL league stage, the Sydney Sixers managed to come out on top right at the end by virtue of winning their last match against the Melbourne Stars while the Perth Scorchers lost theirs against the Brisbane Heat. With the slow, simmering competition of the league stage left behind, they are now about to face off in the much more high-stakes qualifier, one which will determine who gets fast-tracked to the final while the other drops down into the lower bracket to fight the winner of the Knock-Out. Now, the Sixers are the defending champions, and look eager and capable of defending their title. But there’s a twist - only one team has ever successfully retained their title in the entire history of the BBL, and that would be the Scorchers. Additionally, the Scorchers are the team with the highest number of BBL titles with 3 - a number the Sixers will equal should they win this year’s tournament. The sheer amount of pressure that will be on these two teams is unimaginable as we head into this incredibly exciting matchup, so before it starts, let’s check up on them.

Although they lost their hard-earned first place in the final round of matches, the Scorchers will take their presence in the Qualifier any day considering how they started their season - especially when you consider the fact that they had bombed out of the league stage for 2 straight years prior to this. The lack of spinners in their lineup, however, may make them rue the fact that the match is taking place at the spin-friendly Manuka Oval. In their previous match, they asked the Heat to bat first, and despite an early strike and many other scalps to follow, with Jason Behrendorff and Andrew Tye picking up 2 each and keeping their spells economical, they couldn’t prevent the Heat from going all the way up to 181. On the chase, a solid opening partnership didn’t quite translate into a successful innings as most of the rest of the batsmen couldn’t muster up anything substantial. Despite Mitchell Marsh’s brutal 54, and Jason Roy and Liam Livingstone’s 41 and 32 respectively, the Scorchers lost by 6 runs.

It would have been something of a gutting blow if the Sixers were to lose their first place in the league stage to a team that came back from so far behind, so it must have been a boost for the Sixers’ morale when they managed to seal their top spot. Choosing to field first against the Stars, the Scorchers managed to pick off players at regular intervals, and despite a few brave attempts by their opponents, Ben Dwarshuis’ 3-for, Sean Abbott’s dual dismissals, and Steve O’Keefe’s economical spell helped them restrain the Stars for a formidable yet assailable 177. On the chase, the Stars batsmen were divided between good, solid T20 innings’ and hopeless single-digit scores. In the end, James Vince’s 46, Moises Henriques’ 38, Jordan Silk’s 35, and most importantly Daniel Christian’s 49 helped them reach their target with 5 wickets and a ball to spare.

With a 40% chance of scattered showers and cloudy skies that will cast an ominous gloom over the match, the Qualifier might face some stoppages. However, the chances of rain do fall off as the day progresses, so we might have a full match after all. There will also be a bit of a stiff breeze that might affect high catches.

The Manuka Oval pitch is notoriously good for spinners, so batsmen will have to watch out. That being said, Fast bowlers who look for and get movement might also find some juice on the pitch to help them out. Expect scores of 160 and above to be strong.

Can the Scorchers Make it to their first final in 4 years? Or will the Sixers break their hearts to get to their own second in as many years? Find out if our Perth Scorchers versus Sydney Sixers predictions come true on Saturday!
Do you agree with this Prediction?
Like
-1
Dislike
Want to start with a bonus? Choose the best Betting Site for youWhere are you from?
India Bangladesh