Since the dark events of August 2009, Pakistan played their ‘home’ Tests almost exclusively in the United Arab Emirates, which finally ended with Sri Lanka and Bangladesh visiting the country in recent years. With the political situation in the country somewhat improved, they’ll be hosting South Africa. It’s rare - or perhaps impossible - to see a team that has been playing Tests since the 50s have such an abysmal record against a particular side, but Pakistan have an awful record against South Africa. Finally getting them at home after around 14 years, they will be looking to tip those statistics a little more in their own favour. The Proteas on the other hand are rebuilding and polishing a team full of relatively inexperienced faces, with only a handful of veterans around for service. They will be keen on lifting their own morale with an important away series win. This series has been almost a decade and a half in the making, and before it gets under way, let’s take a look at the two sides.

With Babar Azam’s thumb fixed, the entire Pakistan squad will feel rejuvenated due to his presence. The star batsman will head the batting lineup, which also boasts the likes of Abid Ali, Azhar Ali, Fawad Alam, Sarfaraz Ahmed, and Mohammad Rizwan. Abid Ali’s form has been subpar as of late, so he may be replaced by promising youngster Imran Butt. Fawad Alam’s recall to the side was rewarded by his century, so people will look his way for runs. Azhar Ali and Mohammad Rizwan performed well in New Zealand, and should also be in decent form at home. Among the bowlers, young Shaheen Shah Afridi and Test debutant Haris Rauf should strike fear into the hearts of the visitors, while Faheem Ashraf’s spin bamboozles them. The one thing that stands out like a sore thumb in this Pakistan lineup is the lack of all-rounders, with only Mohammad Nawaz - whom we don’t think will make the playing XI in the first match - and Faheem Ashraf being termed as such.

Babar Azam: It’s impossible to keep Babar Azam out of the key player for any team in any format anywhere in the world.

Mohammad Rizwan: Rizwan showed great grit in New Zealand, and hopefully will live up to that reputation at home.

Shaheen Shah Afridi: The young speedster should be terrifying under home conditions.

Haris Rauf: Rauf might just be the revelation of the season for Pakistan if he delivers in Tests as he does in T20s.

Plenty of relatively new faces dot this South African lineup, but we don’t think they will fare as badly in Pakistan as they may have in India or Bangladesh due to the pitches there being slightly more similar to those in South Africa. However, reverse swing may well be a major factor, and though it is a much less persistent threat than spin, adapting to it is no joke. Nevertheless, as far as batting goes the Proteas have veterans in de Kock and du Plessis, and talent in Bavuma, van der Dussen, Markram, and Elgar. In the bowling department, Rabada, Nortje, and Ngidi should tear up the pitch with their speed, while Shamsi and Linde provide a spin alternative.

Faf du Plessis: The grizzled veteran will have a lot riding on his shoulders, and he usually manages to carry it with grace.

Dean Elgar: After showing some real promise at home, Elgar’s first trip to Pakistan should be a test he passes.

Anrich Nortje: If he can pick up some pointers from the Pakistani bowlers, Nortje might be able to exploit the conditions using his skills.

As we mentioned before, Pakistan has a shockingly horrible record against South Africa, having lost 15 Tests and won only 4, with 7 draws. Additionally, they have only won one Test series against the Proteas, and that was back in the 2003/04 season. I’m fairly certain no other team that had a Test status prior to 1992 has this bad a record against any other team, and Pakistan will be keen on making the best of this opportunity - especially with World Test Championship points on the line for both teams.

The good thing about cricket in Pakistan in winter time is the perfect conditions for it. It’s going to be cool and dry on all 5 days, with the drastically low humidity being the only possible problem. There will be a slight wind, but nothing that should trouble an airborne cricket ball.

The pitch at the National Stadium in Karachi provides plenty of support to bowlers of all kinds, but is also kind to batsmen. Expect scores of 400-500 in the first innings, with the lower end being the minimum a team should get to feel safe.

Can Pakistan get an important win to take the lead in the series? Or will South Africa manage to get the better of their hosts as usual? Find out if our Pakistan vs South Africa predictions come true starting Tuesday! 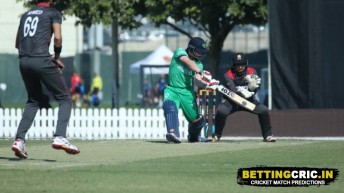