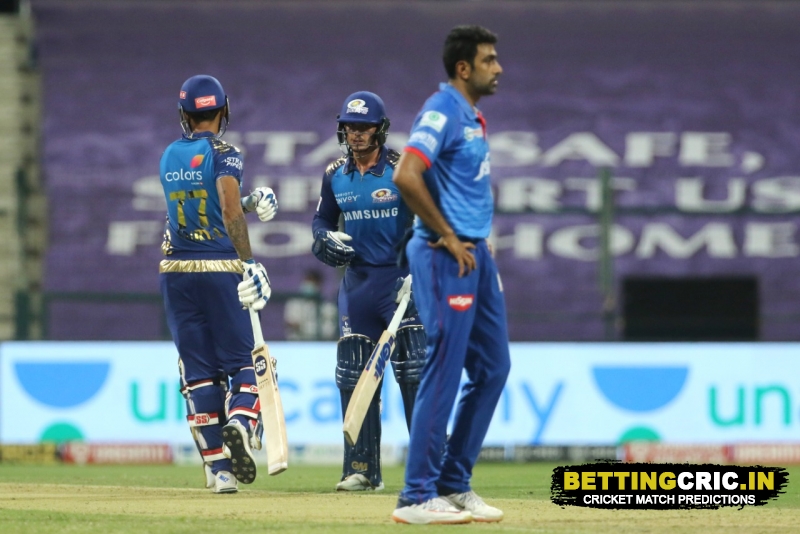 31.10.2020, 15:30 IST
Dubai International Cricket Stadium
Just a few matches ago, Delhi Capitals looked to be on top of the world. Three consecutive defeats later, their very qualification into the playoffs is now in question. With a dwindling net run rate advantage and a risky 14 points to their name, they can now be supplanted by any of four different potential candidates - that is, if they don’t buckle up and win at least one of their last two matches. This won’t be easy, as their last two engagements are against league leaders Mumbai Indians and their immediate competitors Royal Challengers Bangalore. Mumbai themselves had their own woes over the past few days, but became the first team to ensure qualification with a win over RCB. After competing throughout the duration of the tournament for the top spot, Mumbai now has a chance to potentially oust Delhi from contention. This will be intense, and before it begins, let’s take a look at the two sides.

A few days ago, it was virtually unthinkable that Sunrisers Hyderabad would massacre the Capitals on the field, yet that is what happened at their last meeting. Through the skills of David Warner, Wriddhiman Saha, and Manish Pandey, the Sunrisers sprinted to a terrifying 219 for 2. On the chase, Delhi never looked like they were in contention, and despite a couple of moderate knocks, folded for a pathetic 131 in 19 overs. For SRH, Rashid Khan starred with ridiculous figures of 4 overs, 7 runs and 3 wickets. Whatever it is that’s gotten Delhi into this rut, they need to shake it off and get back to their groove or risk undoing all their hard work.

The Indians would have been almost in the same boat as the Capitals had they not won their clash against RCB. It wasn’t easy, though - Devdutt Padikkal’s heated 74 off 45 got RCB to a decent 164 off their 20, with the devilish Jasprit Bumrah picking up 3 for MI. In return, Mumbai started shakily, but a wonderful effort from Suryakumar Yadav saw the blues ease past their point peers. Mumbai have worked hard and honestly deserve to top the league, and with a win here, they will almost certainly be de facto league leaders regardless of other results.

If DC were to bow out after the kind of start they have had, it would be absurd to the point of being downright brutal for everyone associated with them. Expect Shreyas Iyer and Rishabh Pant to anchor the inning, while Kagiso Rabada bounces back from his thrashing by SRH alongside Anrich Nortje.

Mumbai has a golden opportunity to severely inconvenience one of their toughest opponents, and you can rest assured they’ll try their best to take it. Expect Ishan Kishan and Suryakumar Yadav to create plenty of runs, while Jasprit Bumrah and Trent Boult shine with the ball.

Can the Capitals overcome their woes and make their earlier performances worth it? Or will Mumbai once again relegate them to a life of mediocrity? Find out on Saturday!