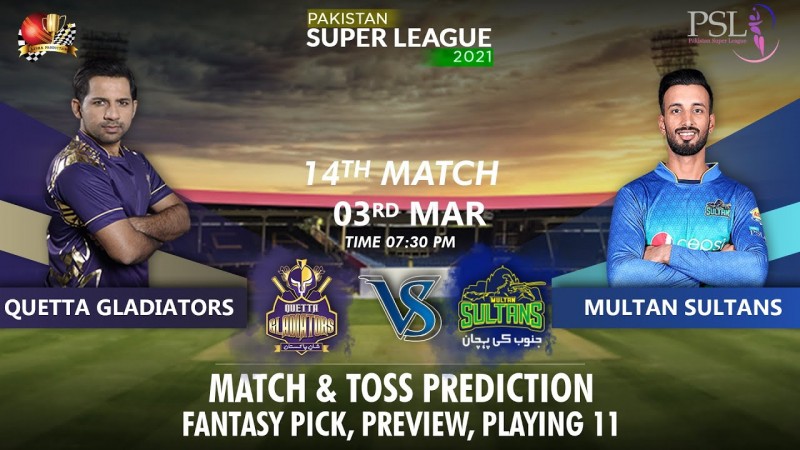 After their excellent performance in last year’s league stage, the Multan Sultans would certainly not have expected to be in the situation they’re in this time this season. With just one win in the bag and 3 losses weighing them down, they’re only above last place by the grace - or should I say the lack of it - of one Quetta Gladiators, who are incidentally their next opponent. The Gladiators are absolutely miserable so far this year. With 4 losses out of 4, they need to win just about every match they have left, or lose a couple and leave it up to others to flounder as well. No matter what they do, they just can’t seem to win a toss for the life of them, and on a bizarre pitch where chasing is everything, that lack of luck is seeing them suffer. Before this battle at the bottom of the table, let’s take a look at the participants.

Just when it looked like the Sultans might make a comeback after losing their first two matches, the reigning champions beat them again to dampen their spirits. Blame it on the toss, I guess. Batting first, the Sultans got a solid 195 on the board with Mohammad Rizwan’s 43 off 32, Chris Lynn’s (finally) 32 off 14, James Vince’s 29-ball 45, and Sohaib Maqsood’s 34 from 27. They were also greatly helped by a mind-numbing 22 extras. However, their bowling was subpar to say the least. Shahnawaz Dhani picked up two wickets and Sohail Khan got one, but none of the bowlers could step the flow of runs or get the wickets required to stop the Karachi onslaught. With 7 deliveries left, the Sultans were beaten by 7 wickets.

Mohammad Rizwan: In top form, Rizwan is indisputably the main man of the Sultans right now.

Sohaib Maqsood: Sohaib has been quite the revelation this season, and his good form continues.

Shahnawaz Dhani: Seemingly the only Sultans bowler with any sharpness, Dhani needs to do even better if his team are to bounce back.

Carlos Brathwaite: He may not have gotten any wickets in the last game, but he was the most economical and caused some trouble for the batsmen.

Things look grim for the Gladiators given their luck and the state of affairs at this year’s PSL. It feels like nothing they do will help them win because they just can’t win the toss. Batting first the fourth time in a row against Islamabad United, they got off to a poor start. Sarfaraz Ahmed did his duty as captain to steady the ship with a solid 54 off 41, while Ben Cutting’s 23-run cameo and Mohammad Nawaz’s slow 29-ball 31 managed to get the team to a mediocre 156. However, as has been usual at this tournament, the chase was unstoppable. Zahid Mahmood did really well for his 2 for 29 and Dale Steyn came back strong this game with 1 for 20 off 3, but it was all in vain as their opponents nevertheless cantered to a 6-wicket victory with 3 whole overs left to bowl.

Sarfaraz Ahmed: The only Gladiators batsman to show consistency, Sarfaraz is the pivotal character in this team’s story.

Faf du Plessis: The experienced South African needs to step his game up and help his team out of this rut while Gayle is out.

Mohammad Hasnain: Expensive in the last match, Hasnain will no doubt bounce back with some terrific quick bowling.

Zahid Mahmood: It takes a great bowler to bowl out the likes of Paul Stirling and Alex Hales, and Zahid will have a lot of expectations riding on his shoulders from now.

Whatever’s in this National Stadium pitch, it has ‘chase’ written on it. With 12 out of 12 matches being a success for the chasing team, choosing to field after winning the toss is a no-brainer. With many 190+ scores chased down, 200+ is the only way to go for the first batters on a pitch that’s decent for fast bowlers and even better for batsmen.

With the wind from earlier in the day dying down by the time this match starts, the only possible negative side to the elements is a small chance for a light drizzle. Other than that, it should be a great time for a match.

Can the Sultans crush any remaining hopes the Gladiators have? Or will those hopes finally manifest in reality through a convincing performance? Find out if our Multan Sultans versus Quetta Gladiators predictions come true on Wednesday!