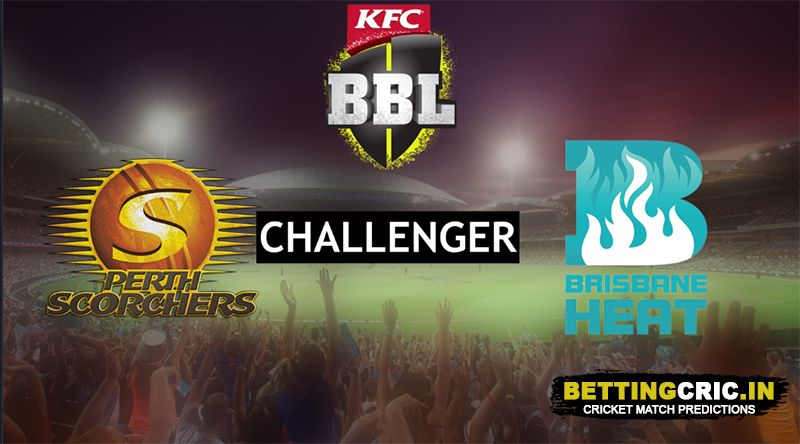 In the Challenger Final of this edition of the BBL, we have two teams that have gone through a trial by fire. The difference is, where the Perth Scorchers’ trials ended after a few weeks and they eventually climbed out of the league in second place, the Brisbane Heat’s trials continued till the last days of the league stage, and followed them into the playoffs as they won 2 lower bracket matches to get to this point. The most compelling factor in deciding this match ahead of schedule, however, may have been a Covid-19 outbreak in Perth, which shifted the match to Canberra’s Manuka Oval. The problem here is that the Manuka is well-known to be a spinners’ ground, which the Heat have some great options for. The Scorchers, on the other hand, don’t have a single regular spinner, and will have to rely on rarely-used part-timers if they want to exploit the conditions. Nevertheless, both teams have earned their merits, and both will be doing their best to go through to the grand final to meet the Sixers one last time. Before the penultimate match of BBL10 begins, let’s take a look at the two teams.

Few things boost a team’s morale like a winning streak or the addition of a strong player to the team, and the Heat have had both in the form of their 3-win streak since the last match of the league stage and the addition of Marnus Labuschagne, who played no small part in their presence at this stage of the tournament. In their last match, the Heat were up against the Sydney Thunder in the Knockout Final. Bowling first, the combination of Mark Steketee and Mitchell Swepson bowled 7 overs together, taking 4 wickets and giving away only 50 runs. This, combined with a maiden by the subbed-out Xavier Bartlett and another decent spell by Labuschagne, helped them limit the Thunder to a middling 158. While chasing, the Heat got off to a poor start and looked like they would lose halfway through the innings, but a solid comeback by Sam Heazlett (74 off 49) and Jimmy Peirson (43 off 24) saw them win the match with 7 wickets and 5 deliveries to spare.

As rampant as the Scorchers’ comeback was, their performance since reaching the top of the table (albeit fleetingly) hasn’t been up to the mark. In their last match, they were facing the Sydney Sixers. Batting first, Josh Inglis’ 69 led the way, with Colin Munro’s 30 and Ashton Turner’s 33 helping out to take the team’s score to a decent 167. Their bowling, however, left much to be desired as apart from part-time spinner Liam Livingstone, none of their bowlers could take advantage of the Manuka Oval pitch. In the end, they lost by 9 wickets in the 18th over after Andrew Tye bowled an unsportsmanlike wide to finish things off.

There’s a pretty strong chance of rain starting around the middle of the match and increasing thereforth, so teams will have to keep DLS in mind. Other than that, things should be great for cricket while the ground is still dry.

As we’ve seen time and again, the Manuka Oval pitch is very biased towards spinners, offering a lot of turn that can make even the most seasoned spin players struggle. Expect a first innings score of 160 to be hard to chase down.

Can the Heat blaze through one more time to reach a final that was improbable for them even a couple of matches ago? Or will the Scorchers return to their dominating ways to try and stop the Sixers from equaling their trophy tally? Find out if our Brisbane Heat versus Perth Scorchers predictions come true on Thursday!