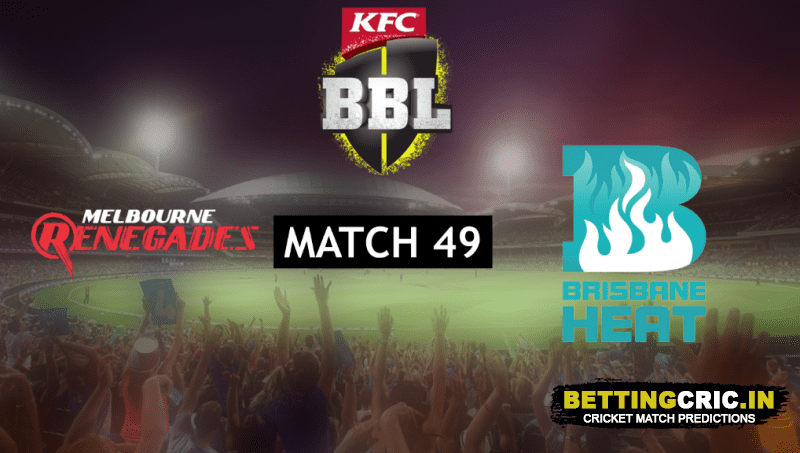 As we predicted, the lack of pressure has gotten the Melbourne Renegades to start playing more freely. Although it’s impossible for them to qualify anymore, they managed to hamstring Melbourne Stars’ chances of doing so. If they do the same against the Brisbane Heat, they will have yet another squad mad at them - and perhaps a few Renegades fans who will be happier. Following their defeats to the Scorchers and the Strikers, the Heat are now languishing down in 7th place, and must make haste if they have plans to qualify for the playoffs. After watching the Renegades play against the Stars, the Heat will be wary of their newfound enthusiasm and free-spirited play. The matchup may be between the two bottom teams, but make no mistake - it will be a thriller. Before the show starts, let’s take a look at the two teams.

It’s a pity that the Renegades are already out, because their campaign could really have used the kind of effort it’s getting now. In their last match, they were bowling first against the Stars. Despite a strong showing by the top order, Zak Evans’ 23 for 2, Peter Hatzoglou’s 34-2, and Imad Wasim and Josh Lalor’s performances kept the target to a reasonable 159. The chase didn’t start as planned, with all 5 top order players playing much more slowly than required - even Sam Harper’s 39 coming off 34 deliveries. However, when all seemed lost for the umpteenth time this season, Mackenzie Harvey strode out to punish everything that came his way. With a fantastic 47 off 21, and supported by Beau Webster’s cameo of 22 off 9, the young Aussie managed to take his team home.

When the Heat bounced back after a poor start, it looked as though they could even become title contenders, but now they’re on the brink of being out of contention for even qualifying. The last time they took to the field, they bowled first against the Adelaide Strikers, but only Xavier Bartlett and Marnus Labuschagne of all people had a decent time with the ball. Given a massive 197 to chase, Things never looked up again for the Heat. Labuschagne’s 28 was the highest score, with Bryant’s 25 being more in line with what was needed. After a gradual collapse, the Heat were bowled out for 115 in the 18th over for a massive 82-run loss.

There is a miniscule chance of rain on this beautiful partly cloudy day in Melbourne. The temperature will be hovering around a pleasant early 20s, and with moderate humidity and a light breeze, it should be a good time for cricket.

The MCG will, as usual, support bowlers a little more than batsmen. Fast bowlers will find pace on the pitch, and spinners will find turn. However, it’s not exactly outright scary for batters, so there will be a decent amount of runs as well. Expect 165-170 to be a solid 1st innings score.

Can the Renegades build up a winning streak to no real avail except the frustration of the Heat? Or will the latter manage to put the Renegades back in their place to climb back up the table? Find out if our Melbourne Renegades vs Brisbane Heat predictions come true on Saturday!