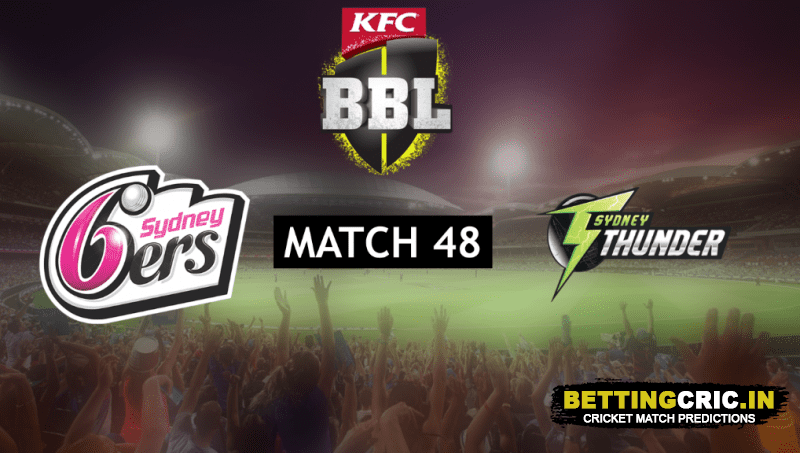 In the 10-season history of the BBL, only the Perth Scorchers have managed to top the league after winning the previous year, but this year the Sydney Sixers are just 5 points away from mimicking the feat. far ahead of the rest of the pack, they have 8 wins and just 3 losses to their name, with an additional 8 Bash Boost points boosting their tally. Next up, they meet former table-toppers Sydney Thunder, who just haven’t been the same since losing to the Sixers. Stuck at 23 points for the last 3 matches, the Thunder seems to have lost their way since the best start they’ve ever had, and are now in a situation where even their qualification to the playoffs is in question. While the Sixers want this win to all but seal their top spot, the Thunder need this to keep their playoff dreams healthy. Before the second episode of the Sydney derby begins, let’s take a look at the two sides.

If the Sixers get their absentee players back from international duty, not only will they be an even more formidable opponent, but they’ll be confused about which players to keep in the playing XI. Moises Henriques, Sean Abbott, Nathan Lyon, and Mitchell Starc are all potent, with a couple being exceptional players, but Lyon and Starc will definitely want some rest after a grueling Test series. In their last match, the Sixers were up against the in-form Perth Scorchers. Bowling first, they couldn’t do much early on, but later managed to limit the Scorchers’ ambitions, with Carlos Brathwaite, Jake Ball, and Daniel Christian picking up 2 each to bring things under control. On the chase, who else but Josh Philippe (84) struck up a strong 106-run partnership with James Vince (52) to get his team to the brink of victory, which was completed by his teammates after a short spell with 7 wickets and 7 deliveries to spare.

Three straight defeats is enough to shake any team, and the Thunder will need to gather their bearings and focus on the task at hand. Not receiving any high-level players from the end of the international matches, the Thunder instead have been hit by the loss of Daniel Sams, who will miss the rest of the tournament because of injury. In their last match, they batted first and built up a strong total of 177 courtesy of Sam Billings’ 50 and 3 20-something cameos from Usman Khawaja, Alex Hales, and Callum Ferguson. However, their bowling turned out to be subpar as Tanveer Sangha was the only bowler to take more than one wicket, and everyone except Ben Cutting was very expensive. In the end, the Thunder lost by 6 wickets with 2 overs remaining.

It’s predicted to be a warm, dry summer’s day in Adelaide tomorrow, with the temperature in the high 20s most of the day. There will be a few clouds in the sky, but nothing that can cause rain. Things would have looked to be on the hot side had a nice breeze not been promised to blow across the land.

After today’s match between the Strikers and the Heat, the pitch at the Adelaide Oval will be better understood, but for now, what we know is that there’s going to be pace and bounce - and lots of it. Fast bowlers who can move the ball will especially enjoy bowling good length and having the ball curve away from the batsman. However, it’s not all about the bowlers, as batsmen will have their say, too. Expect scores of 175 to be a relatively safe bet.

Can the Sixers extend their lead and go one step closer towards finalizing their top spot? Or will the Thunder manage to roar just in time to keep their playoff dreams going strong? Find out if our Sydney Sixers vs Sydney Thunder predictions come true on Friday!