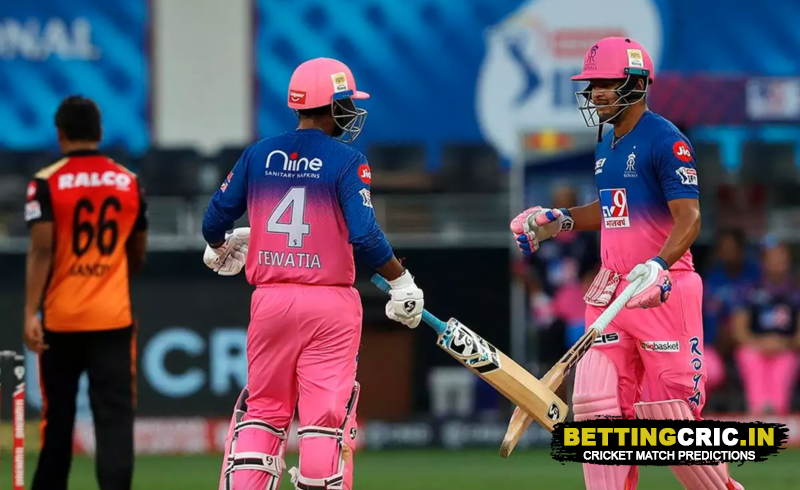 22.10.2020, 19:30 IST
Dubai International Cricket Stadium
Kolkata Knight Riders’s defeat of Sunrisers Hyderabad was a double-edged sword for Rajasthan Royals. On one hand, their point-peers SRH were forced further down the table, but on the other, the all-important fourth place went further away from their reach. Now, RR have to win the rest of their matches and hope that the team immediately ahead of them drops the ball. On the other hand, it would take a minor miracle for seventh-place SRH to qualify. Not only will they have to win the rest of their matches, but they also have to hope that the three teams in the way of them and that goal somehow end up with the correct permutation of losses to allow their promotion. Otherwise, it’s just practice for next year. Either way, there’s a lot on the line for both teams, and before they face each other, let’s take a glance at them.

It’s been a roller-coaster season for Rajasthan, and there’s still time for a final rise or dip. They have looked absolutely fantastic at times, while looking pretty terrible at others. With four wins and six losses, they need to be more consistent. In their last game, they were up against Chennai Super Kings, who batted so slowly it seemed as though their game plan was to bore RR players to death. Scoring 125 in a performance that I as a writer personally refuse to bother to detail, they saw a glimmer of hope when they reduced RR to 28 for 3, but Jos Buttler put up a solid 70 to dismiss said hopes. Such freebies are rare, and RR will still have to address their performance issues.

The Sunrisers have had a very poor season, with usual main man David Warner not being able to perform at the rate he usually does. In their last match, they were up against Kolkata who got 163 on the board through five average performances. In return, SRH started pretty steadily and looked to be in a winning position despite incredible bowling by Lockie Ferguson. However, they could only equal Kolkata’s tally, and Ferguson came back to restrict them to a mere 2 in the super over. The rest was history. This is SRH’s last chance to even think of qualification, and if they want to advance, it’s literally now or never.

RR probably have the edge on this one, as long as their important players pull off their parts. Expect Rahul Tewatia to pull off his magic with the bat and ball, with Jos Buttler also scoring high and Jofra Archer picking up important wickets.

After losing in spectacular fashion against RR last time, SRH will want to redeem themselves for their mistakes. Expect David Warner and Jonny Bairstow to hit them out of the park, while Rashid Khan and T Natarajan send them back to the pavilion.

Can Rajasthan get these important points and hope for mistakes from KKR? Or will Hyderabad shatter RR’s dreams to strengthen their own? Find out on Thursday!