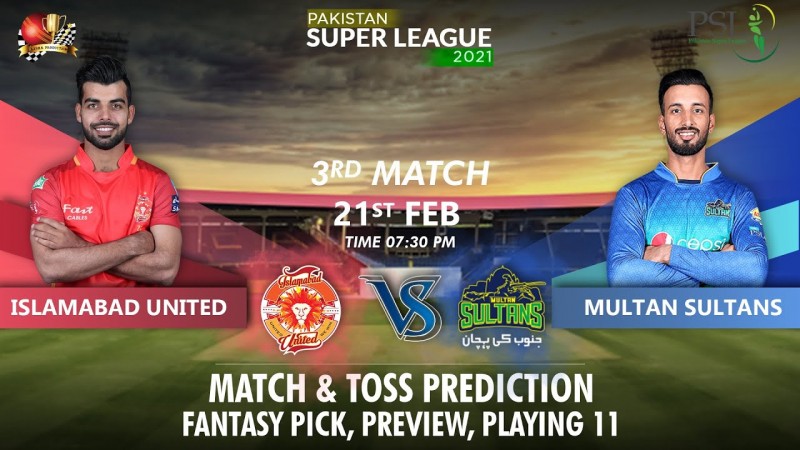 Last year, Islamabad United finished the league stage dead last, having only won 3 of their 10 matches. For the most decorated team in the PSL, it was quite a step down, and they will be hell bent on reversing their downward spiral this season. Their first opponents had a very different league stage last season - finishing right at the top - but they couldn’t win a single playoff match. The Sultans tasted qualification to the playoffs for the first time since their addition to the PSL, and they will no doubt want a second chance to redeem their delayed failure. Both teams boast a bevy of excellent players, and it should be one hell of a match. Before all hell breaks loose, let’s take a look at the two teams.

The two-time champions faced plenty of backlash for their lackluster performance last year, and they’re back with some serious talent. Signing a total of 13 players, IU acquired Alex Hales, Paul Stirling, Phil Salt, and Iftikhar Ahmed to help with the bat; Lewis Gregory as all-round support; and Hasan Ali, Fawad Ahmed, and Ali Khan in the bowling department. However, 3 of their important overseas players - Colin Munro, Chris Jordan, and Reece Topley - won’t be available for play. As far as existing players go, IU are blessed with the likes of Asif Ali, Shadab Khan, Hussain Talat, Faheem Ashraf, Zafar Gohar, and Muhammad Musa.

Alex Hales: After his brilliant batting earned him the Orange Cap in the BBL, Hales will look to perform similarly at the PSL.

Shadab Khan: The veteran Pakistani will have to lead his team from the front in the absence of much batting expertise.

Faheem Ashraf: A talented medium pacer with a knack for picking up important wickets, Faheem is a gem to have on any team.

Ali Khan: The American fast bowler has been a revelation since his discovery, and all eyes are on him to pull off some miracles.

It’s a tough reality to face when you win the most matches in the group stage and qualify at the top of the heap only to be knocked out shortly after. However, the Sultans surely learned a lot from the experience, and they’ll be using it to make a better run this season. As far as new additions go, the Sultans got 10. Out of these, Chris Lynn, Adam Lyth, and Mohammad Rizwan will strengthen the batting, while Carlos Brathwaite adds some flair to the all-rounders list. Among bowlers, all of their 5 acquisitions are relatively lower tier, with Sohail Khan and Imran Khan the more experienced of the lot. The Sultans will also have a number of old talents joining them in the form of Rilee Rossouw, James Vince, Shan Masood, Khushdil Shah, Shahid Afridi, Sohail Tanvir, Imran Tahir, and Usman Qadir.

Mohammad Rizwan: Brimming with talent, this up-and-coming national star is a force to be reckoned with.

Chris Lynn: The explosive Aussie will no doubt hit a few out of the park.

Shahid Afridi: The aging leggie is still destructive with the ball, especially on Pakistani pitches.

Sohail Khan: Packing a punch with his speed, Sohail will love the Karachi pitch.

For the second match of the day, the heat will have lessened somewhat, while all other factors point to excellent cricketing conditions.

As it’s the second match of the day, footmarks on the pitch may be a bit of a problem for some players, but otherwise it will still be good for batting as well as for fast bowling. Expect first innings scores of 160 or more to be competitive.

Can Islamabad United make a statement victory to start their campaign? Or will the Sultans continue last year’s league form? Find out if our Islamabad United vs Multan Sultans predictions come true on Sunday!