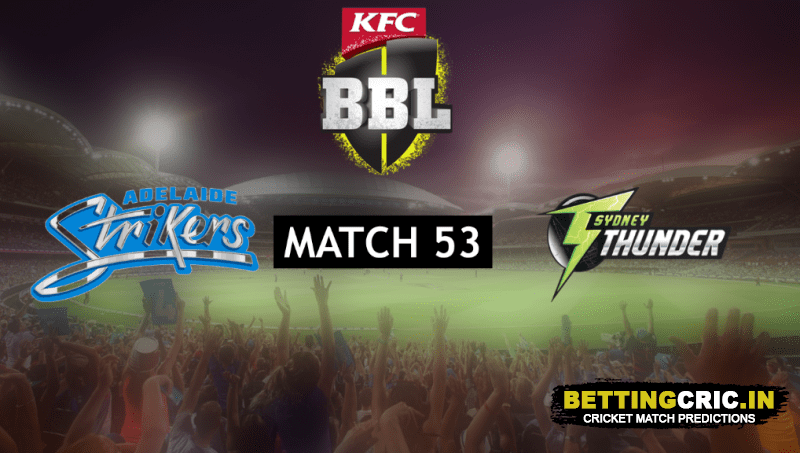 Betting odds for AS v ST

It’s been one hell of a BBL, and as we enter the final games of the league stage, there are still 5 teams vying for qualification. The Adelaide Strikers were near the bottom of this pack, but an important win over the Sydney Thunder has consolidated their chances while reducing the chances of the latter. Currently up in fourth place, the Strikers might even break into second if they win their next match and the Sixers lose both of their matches. The Thunder, in the meantime, need to either win their next game or at least get the Bash Boost point in order to qualify safely. It’s all coming down to the last matches between these teams, and before the action begins, let’s take a look at these two teams.

The Strikers were looking low before the return of important players who were busy with international duty, but now they seem like a much stronger, more cohesive unit. Batting first against the Thunder, none of their top 5 players managed to get a big score, but they all managed decent knocks between 22 and 31 to put their team in with a chance. Defending a moderate 159, it was up to their bowlers to bring the game home - and bring it home they did. A superb economical performance by Michael Neser (3-0-17-2) and Peter Siddle (4-0-22-2) saw them keep the Thunder at bay for an extremely important win.

It’s been a depressing second half of the tournament for the Thunder. Not long ago, they were happily on top with six wins and only 2 losses, and now they need a point to even confirm their qualifications for the playoffs. Bowling first against the Strikers, things could have gone south pretty quickly given how expensive some of the bowlers were, but Adam Milne’s ridiculous spell where he gave away only 6 runs from his 4 overs kept things tight, and Brendan Doggett’s dual strike for only 21 helped as well. Chasing 159 shouldn’t have been difficult given the pitch, but after Hales departed in the third over, the Thunder sort of went to sleep. Usman Khawaja’s 36 wasn’t followed up by anyone, with the middle order largely failing, and Ben Cutting and Nathan McAndrew were too little too late. In the end, the Thunder fell short by just 6 runs.

AS vs ST weather conditions and pitch report

Given the ominous nature of the forecast, who goes through to the playoffs might not come down to a question of which team plays better. There is a 90% chance of heavy rain, and should it come down in the way it’s being predicted to, every other factor will be nullified. Even if play continues, it might be a super short match on a relatively wet outfield, so let’s just keep our fingers crossed.

The pitch in Adelaide will be its usual self with plenty of bounce and pace. Spinners might find some turn, but it will mostly be the fast bowlers who benefit. Batsmen seem to be a little less favoured as the matches take place, so expect a score of 170-odd to be strong.

Can the Strikers make the qualifiers in style and rain on the Thunder’s parade? Or will the latter manage to stay true to their start for an important win? Find out if our Adelaide Strikers vs Sydney Thunder predictions come true on Monday!