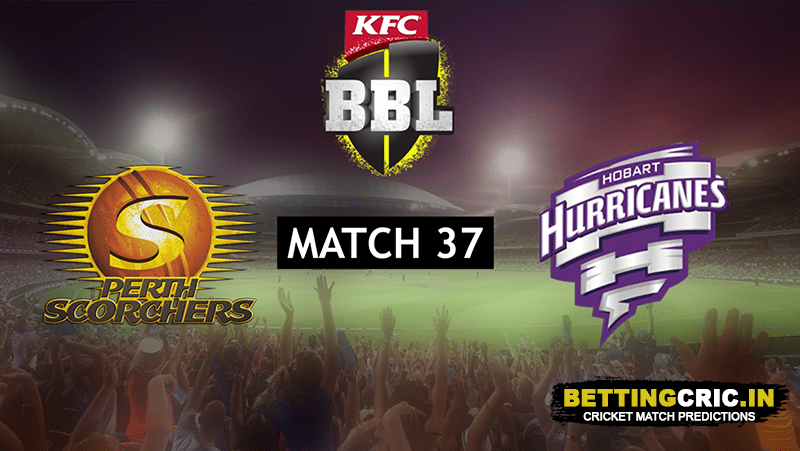 Bet on PSBet on HH
12.01.2021, 13:45 IST
Perth Stadium
After their poor start to the season, the Perth Scorchers have come a long way to give themselves a strong chance of qualifying for the playoffs, which would put an end to their two year streak of failing to do so. Currently in fifth place, they are level on points with the Brisbane Heat, but ahead on run rate. However, they have played one match less, and a win in that match would take them up to third. Speaking of third place, Hobart Hurricanes are the current occupants of that, and they are also the team the Scorchers are up against in this match. The Hurricanes were doing pretty well and were contenders for the top spot, but back to back losses have put them within touching distance of the other end of the qualification pool. With both teams desperate for a win, this match promises plenty of excitement, and before it starts, let’s take a look at the two teams.

Whatever the Scorchers squad started eating since their fourth match, it seems to be working wonders. Not only have they won four matches in a row, but they have won almost all of them convincingly. In their last match, they were up against second place Sydney Thunder. Batting first, their start wasn’t the best, but a 50 from Colin Munro and a flurry of solid cameos from others, most notably Ashton Turner’s 31, saw them pile up a dangerous 185. When it came time to defend, Jhye Richardson was magnificent for his four-for, and Jason Behrendorff and Andrew Tye picked up 2 each. In the very last ball of the match, the Scorchers bowled out their opponents 17 runs short.

A double stumble can’t be easy on the Hurricanes’ morale, especially this late in the tournament. If they lose this and slip below the playoff spots, they will be hard pressed to come back. In their last match, they were up against their immediate competitors Sydney Thunder. Fielding first, the only bowlers to find success were D’Arcy Short with 3 for 26 and Sandeep Lamichhane with a solitary wicket for his 23. Add to that the fact that every other bowler was expensive, and Thunder were able to get themselves to a decent 167. On the Hurricanes’ turn to bat, Only Ben McDermott and Peter Handscomb had a decent time out, but even they could only make 22 and 30 respectively. Ultimately, the Hurricanes were only able to get a poor 128.

With a high of 30 degrees, some clouds, and no chance of rain, it should be a great day for cricket in Perth. However, there will be a pretty strong breeze blowing that might make high balls difficult to judge.

The pitch at Perth has been pretty great for cricket as a whole, with mostly moderate to high scores being scored, defended, and chased. There’s plenty here for bowlers and batsmen, but the latter should aim for 180+ if they want to feel safe.

Can the Scorchers get a dream five wins in a row to take another important step towards qualification? Or will the Hurricanes blow them away at their own home? Find out if our Perth Scorchers versus Hobart Hurricanes predictions come true on Tuesday!
Want to start with a bonus? Choose the best Betting Site for youWhere are you from?
India Bangladesh