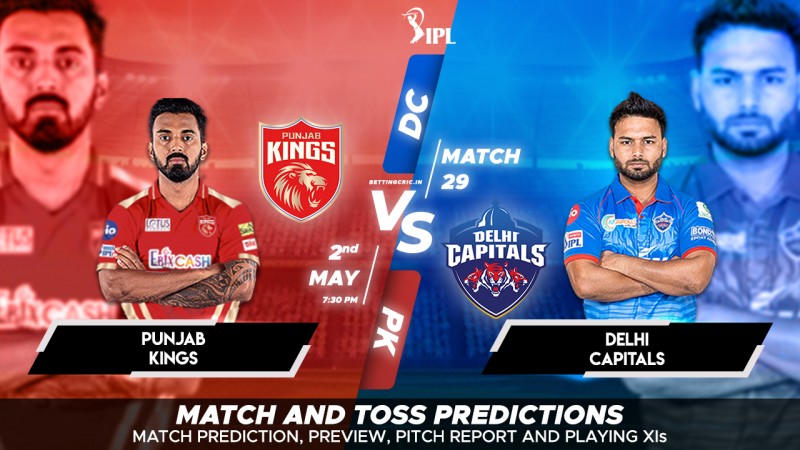 After an important win against the Royal Challengers, Punjab Kings are finally within touching distance of the playoff spots. They successfully pulled RCB down from 2nd place, and now must do the same to Delhi Capitals. The Capitals are equal on points with league leaders CSK, but the latter have a game in hand. As a result, DC must win this match in order to stay in the top two. Before KL Rahul and Rishabh Pant get to settle their wicket-keeping rivalry on the field, let’s take a look at the two sides.

As luck would have it, PBKS have finally made a good change to their playing XI. Newcomer Harpreet Brar showed plenty of promise, and as long as they replace Nicholas Pooran with Dawid Malan, they should have a solid chance of winning this match. In their previous match, KL Rahul finally pulled off another truly excellent innings with 91* off 57, and with Chris Gayle’s 46 off 24 and Harpreet Brar’s 25-run cameo, the Punjabis were able to put forth a strong 179. On the defense, almost every bowler managed to strike, but Harpreet Brar’s triple strike - Virat Kohli, Glenn Maxwell, and AB de Villiers - all but sealed the deal. With some good support from Ravi Bishnoi, the duo helped PBKS attain a strong 34-run victory.

KL Rahul: If he can continue playing like he did last match, I will both be impressed and happy for him for learning the error of his ways.

Chris Gayle: The big man went ballistic last match, and he will try to repeat the feat in the next one.

It was with a careless flourish that DC all but flattened KKR in their previous match. Bowling first, Axar Patel did well to take two, but it was the magic of Lalit Yadav, who took just as many wickets at almost half the economy rate, that helped them keep KKR limited to a modest 154. In the second innings, Prithvi Shaw went on such a rampage (82 off 41) that Shikhar Dhawan could afford to play an ODI-esque innings of 46 off 47, which saw DC take the win with an easy 7 wickets and 21 deliveries left.

Shimron Hetmyer: After barely getting a decent chance in the middle this season, Hetmyer might just do something big this match.

Steven Smith: Although he is far from the golden boy he once was, Smith is still a strong player waiting to prove himself again.

Avesh Khan: Finally managing to not take the highest wickets in a match, Avesh will want to bounce back with a strong performance.

Unlike the one in Delhi, the pitch in Ahmedabad is proving to be a little more in favour of bowlers, although it’s not completely unlikely for the batting team to be able to ramp things up. Expect teams to choose bowl first, and first innings scores of 165+.

Ahmedabad is basically a slightly hotter Delhi, with dry heat with a slight breeze dominating the weather forecasts.

Can the Kings string two wins together to make a realistic claim on the playoff spots? Or will the Capitals deny them to safeguard their own interests in the same? Find out if our PBKS vs DC predictions come true on Sunday!