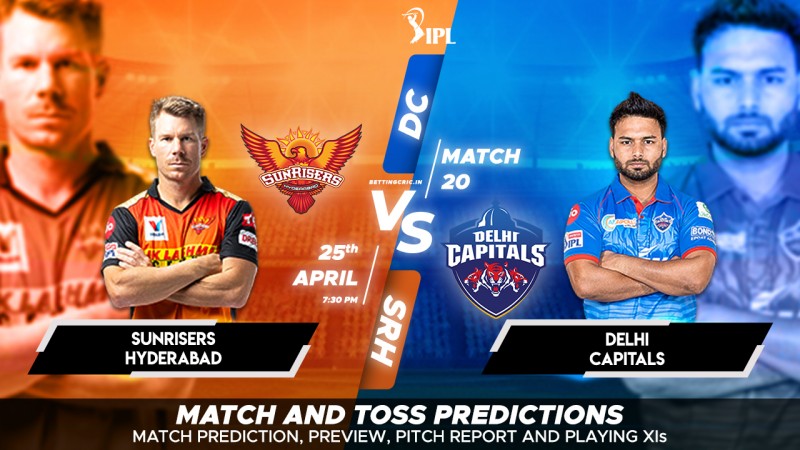 With a win finally in the bag and Kane Williamson back in the squad, Sunrisers Hyderabad will feel a lot more confident about their chances against Delhi Capitals. However, they did also suffer a setback in the form of Thangarasu Natarajan being ruled out of the rest of the IPL due to an injury. The capitals on the other hand have had a long break since finally defeating their nemesis Mumbai Indians, and are confident and looking for someone to trounce. With one team unwilling to sink lower on the table and the other desperate to rise, we’re primed for some solid action. Before it begins, let’s take a look at how these teams have been doing.

After four straight defeats, the Sunrisers didn’t just get a win - they got a resounding one that helped their net run rate considerably. Fielding first against Punjab Kings, an excellent performance from Khaleel Ahmed (3-21) was compounded by Abhishek Sharma’s double-haul and Rashid Khan’s economical spell. Combinedly, the SRH bowlers struck PBKS down for just 120. In the second innings, a measured, steady 63 (56) from Jonny Bairstow was helped along by similar innings’ by David Warner (37 off 37) to all but seal the deal, which they did with 9 wickets in hand.

David Warner: Although not as prolific a scorer as he was in his prime, Warner is still scoring well.

Kane Williamson: Back in the side at last, Williamson will be looking to rack up the runs.

Rashid Khan: People play him way too carefully for him to strike multiple times, but Rashid nevertheless creates a lot of pressure.

Khaleel Ahmed: The SRH quick has been pretty strong this season, and played a big role in helping them win their first game.

It was with a strong sigh of relief that the Capitals finally took out the Indians, who have been struggling to find their footing on the Chennai playing surface. Bowling first, Amit Mishra’s return to the side proved to be important as he took 4-24, and with support from Avesh Khan (2-15), DC were able to tie MI down to just 137. On the chase, Shikhar Dhawan once again played the anchor with 45 off 42, and with 33 and 22-run cameos from Steven Smith and Lalith Yadav respectively, the Capitals managed to win the match by 6 wickets with 5 deliveries to go.

Shikhar Dhawan: In absolutely scintillating form, Dhawan has been amazing for DC so far.

Steven Smith: Smith might not be in the greatest form in the IPL for the last two years, but he’s still as potent as they get.

Amit Mishra: After his amazing turn versus the Indians, all eyes will be on Mishra.

Avesh Khan: The young man has consistency personified for the Capitals.

The pitch at the MA Chidambaram is as bowling-sided as it ever was, which many have begun complaining about. To be fair, people watch T20 for the big hits, and when that’s consistently missing, few people want to watch such matches. Nevertheless, expect bowlers - especially spinners - to dominate, and first innings totals of 150 or so. Teams that win the toss will be confused between batting first to avoid the slowing of the pitch, and fielding first to avoid possible dew.

No prizes for guessing that it’ll be a warm, slightly humid night with a slight breeze in Chennai, and there won’t be any rain.

Can the Sunrisers make it two in two to start a proper comeback? Or will the Capitals inch closer to league leader RCB? Find out if our SRH vs DC predictions come true on Sunday!