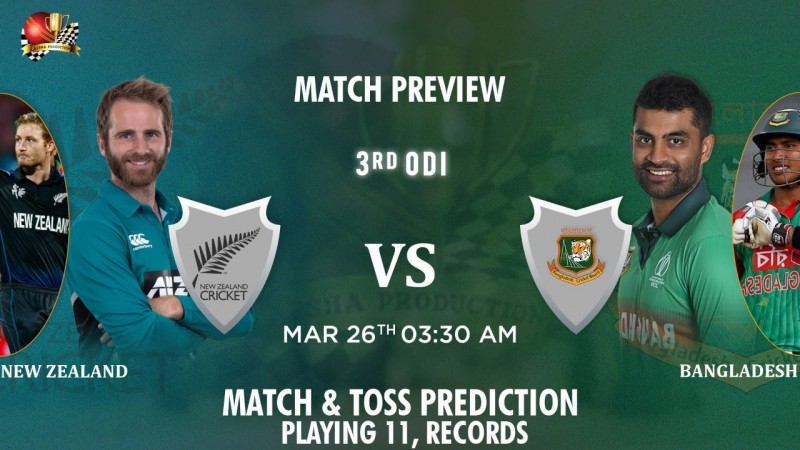 For a match that ultimately ended up being a relatively comfortable win for the Black Caps, the second ODI between them and visitors Bangladesh wasn’t without its roller coaster moments. Had the Tigers utilized their overs and circumstances better, it might have brought them their first ever win on Kiwi soil as well as a chance to win their first series there. Unfortunately, they will now invariably go back with a lost series, but perhaps the last performance will embolden them and give them the confidence they need to win the third and final match of the series, which the Kiwis will be looking to bag in order to complete yet another whitewash and get another 10 points in the Cricket World Cup Super League. Before the two teams have at it again, let’s take a look at how they’ve been doing.

With this victory, New Zealand once again proved that they are a force to be reckoned with in the ODI scene - capable of dealing with all forms of pressure. Bowling first, they only managed to take 6 wickets in total, but it was that low economy rate on most of the bowlers that did the real damage. Mitchell Santner may have taken two wickets, but Matt Henry and Kyle Jamieson, despite only taking one wicket each, bowled 5 maidens between them, effectively curtailing the flow of runs to ensure they had a relatively gettable target. Despite losing 3 early wickets, a massive partnership between Devon Conway (72 off 93) and Tom Latham (110 off 108) saw the Kiwis establish a solid turnaround, with the latter seeing them through with 5 wickets in hand after being helped by James Neesham’s 30-run cameo.

Tom Latham: After an innings like that, it’s hard to exclude the capable captain from this list.

Devon Conway: Fast proving himself to be a master of the shorter forms of cricket, Conway will have many an eye upon him in the next match.

Matt Henry: Given his performance in the series so far, Henry will most likely shine once again.

While their increased confidence has been talked about, one issue for Bangladesh will be the process of recovering their morale following a defeat which should by all means have been anything but. On top of that, a muscle pull by Mustafizur Rahman might see him miss the last match. In the last match, Bangladesh were off to a snail’s start due to the swing produced by the new ball. The batsmen took an excruciatingly long time to recover, and despite some good late acceleration, it wasn’t enough. Tamim Iqbal’s 78 off 108, Soumya Sarkar’s 32 off 46, and Mushfiqur Rahim’s 34 off 59 all counterbalanced a superb 57-ball 73 by Mohammad Mithun, meaning Bangladesh could only get to a barely decent (considering the pitch) 271. On the defense, newcomer Mahedi Hasan and the experienced Mustafizur Rahman took two each, but despite a few economical performances, they ended up losing with 10 deliveries still to go.

Tamim Iqbal: While he did well in the last match, Tamim must give Bangladesh a quicker start.

Mohammad Mithun: After showing some real promise, Mithun will be keen on doing even better.

Mahedi Hasan: Mahedi had a great start to his career - one he’ll be eager to build on immediately.

Mehidy Hasan Miraz: Despite not being able to collect a scalp, Miraz has remained economical and managed to trouble the batsmen.

The Basin Reserve features a pretty typical New Zealand pitch, with fast bowlers absolutely loving the movement and bounce. That being said, if batsmen are able to see out the early shine of the ball, they will love how quickly the ball comes on to the bat. First innings scores of 280+ would be a good bet on this ground.

Other than being too cold for the Bangladeshi team, the weather in Wellington will be pretty good for cricket, with a negligible chance for rain and a nice breeze that won’t be strong enough to disrupt play in any way.

Can New Zealand complete whitewash Bangladesh as they have so many times before? Or will the Tigers roar louder and take their first win against the Kiwis in the latter’s home? Find out if our New Zealand versus Bangladesh predictions come true on Thursday!