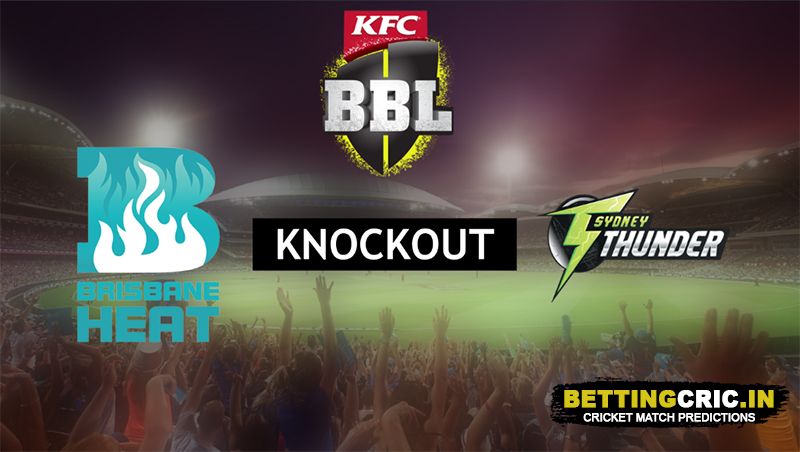 It’s been quite an inspiring journey for the Brisbane Heat at this year’s BBL. After a miserable start, they somehow managed to claw their way back into the playoff spots, and despite many stutters and hiccups on the way, they managed to qualify, and even beat the Adelaide Strikers in the Eliminator Final. Moving forward in the lower bracket, they now face an arguably more worthy nemesis, the Sydney Thunder. For the second time in two years, the Thunder find themselves in the Knockout Final of the BBL. Last year, they were able to win this very matchup against the Adelaide Strikers before being knocked out by the Melbourne Stars in the Challenger Final. The difference this year is, they have looked much better as a team, having led the league for quite some time mid-season and ending it in third place as opposed to fifth last year. Both teams have a point to prove, as both are relative underdogs in the context of the BBL, so this is going to be one hell of a match. Before the tossing bat is flipped up in the air,  let’s take a look at the two teams.

We’re honestly confused as to why the Heat keeps picking Ben Laughlin anymore. I understand that he’s the highest wicket taker in the history of the BBL, but the man hasn’t struck since January 25th 2020. Nevertheless, given the spinners the Heat have and how well they played in their last match at the Manuka Oval, the outcome of the match might just depend more on the bowlers than the batsmen, just like in their match against the Strikers. In that match, the Heat were bowling first, and just never let the Strikers get the runs flowing. Marnus Labuschagne once again picked up 3, while Mitchell Swepson took another two, and the Heat were able to hamstring the Strikers enough to only need 131 to win. Although they did lose a few early wickets, Chris Lynn’s men managed to win the match by 6 wickets with 7 deliveries in hand thanks to Joe Denly’s 41 and Jimmy Peirson’s 47.

Chris Lynn: He may have flopped last game, but Lynn is an incredibly important part of the team on any given day.

Jimmy Peirson: The former captain was the hero of the last match, and will be a player to watch out for.

Marnus Labuschagne: Whether he scores runs or not, Labuschagne will almost certainly take wickets at the Manuka Oval.

Mitchell Swepson: The up and coming spinner has been pretty consistent lately, and he will need every bit of that consistency to win this match.

The Thunder sure have had their moments this season, and although they’ll be disappointed at not making the top two, they will be happy to have made it through to the second round at all, as that was up for debate until the last match. In that match, the elements made sure that the game was shortened to only 14 overs a side, and through some excellent bowling, the Thunder managed to keep the Strikers limited to just 115. Nathan McAndrew and Brendan Doggett were the architects of that feat, with both keeping things extremely economical and also picking up a wicket each. On the chase, the Thunder lost Usman Khawaja off the first ball, but the heroics of Alex Hales (63 off 39) and Callum Ferguson (46 off 33) were enough to see the Sydney team through with 9 wickets and 11 deliveries in hand.

Alex Hales: The Orange Cap holder has been the saviour of the Thunder on many occasions, and needs to step up just a few more times to land the team their second title.

Callum Ferguson: After his performance in the last match, Ferguson will have a lot of confidence to deal with whatever comes his way.

Chris Green: The young spinner will be important for the Thunder given the nature of the pitch.

Tanveer Sangha: Once again, Sangha is crucial to the Thunder cause wherever spin is king.

Considering how ominous the clouds above Canberra will look for the next few days, it’s a relief to know that the forecast for rain will dwindle as the hour of the match approaches tomorrow. Other than that threat, the elements will be kind on the players, with only a relatively strong breeze being a potential factor that can trouble play.

As was seen in the Heat vs Strikers match, the Manuka Oval pitch is very, very good for bowlers - especially spinners and fast bowlers who like to bowl cutters. Batsmen beware, because it will be a tough pitch where even 150-155 will be a good total.

Can the Heat win this to be one step away from the final for the first time in 4 years? Or will the Thunder do the same to move closer to their second final in 5 years? Find out if our Brisbane Heat versus Sydney Thunder predictions come true on Sunday!