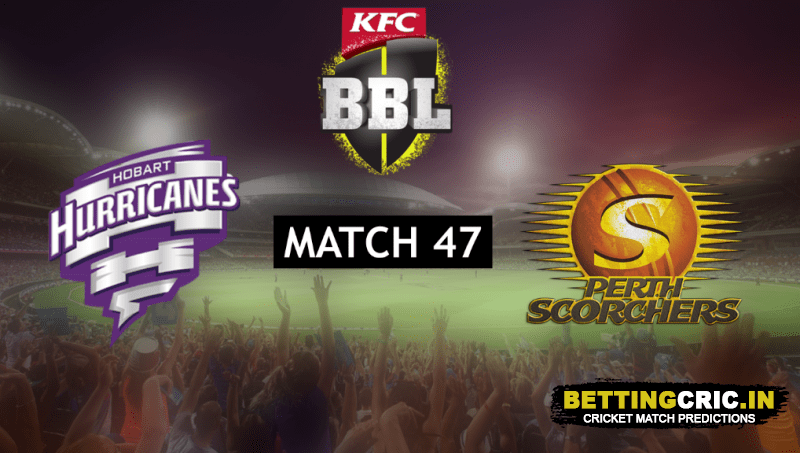 Despite climbing up to third following their last match, the Hobart Hurricanes have since slipped down to fifth. Two points ahead of sixth and 3 ahead of seventh, they need this win to stay inside the playoff zone. This will be pretty difficult as their next opponents are the in-form Perth Scorchers. The Scorchers have been in absolutely blistering form since their early slump ended, having lost only one of their last 7 matches. They are currently second, and will be looking to stay there with a win against the Hurricanes. Before the sound of cricket fills a relatively empty MCG, let’s take a look at the two teams.

The Hurricanes’ bowling has been worse for wear James Faulkner got injured, and now that he’s gone and worsened his injury, he will be out for the entire duration of the tournament. This means there will be a lot of pressure on Riley Meredith and Scott Boland, who will take center stage. They’ve been pretty good in their own right, so it’s not a complete blowout. In their last match, HH were up against the mighty Sydney Thunder. Bowling first, a fantastic 4-for from the aforementioned Boland saw his team manage to relatively contain their opponents. With a target of 178, A terrible opening was balanced out by a solid middle order, as Dawid Malan’s 42 and Ben McDermott’s 96 almost took them all the way there, with the journey being completed by Peter Handscomb and Tim David.

After bouncing back from their defeat against the Sydney Sixers earlier in the week for a romp against the Brisbane Heat, the Scorchers will be confident about keeping their hard-earned second place. Although Ashton Agar’s injury will keep him out of the PS lineup for the duration of the BBL, they will hopefully get Cameron Green back soon. In their last match, they batted first, and despite a poor performance by the opening pair, Colin Munro’s massive 82 held the innings together, and with cameos from Josh Inglis and Ashton Turner, the Scorchers managed to stack up a strong 174. On the defense, their pace attack came alive as they combined to take out 9 wickets between the four of them, with Jhye Richardson, Jason Behrendorff, and Andrew Tye taking 2 each, and Fawad Ahmed getting 3. The Heat were bowled out for 115 by the 17th over.

It should be a pleasant, partly cloudy Friday in Melbourne, and with no rain predicted, decent humidity and a nice soft breeze blowing, conditions are predicted to be as ideal for cricket as they can be.

The pitch in Melbourne is excellent for all kinds of cricket. Both fast bowlers and spinners will enjoy bowling on it, with pace, bounce, and turn all present, and even batsmen will enjoy batting on it with the ball coming on to the bat without changing pace off the bounce.

Can the Hurricanes string two wins back to back to rekindle their hopes of a top-two finish? Or will the Scorchers close the gap on the Sixers by continuing their excellent form? Find out if our Hobart Hurricanes vs Perth Scorchers predictions come true on Friday!