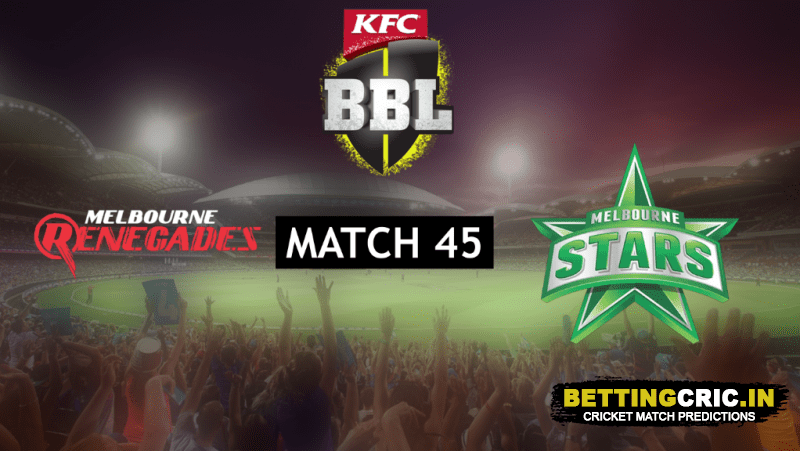 It’s not easy to be the first team to be knocked out of the running, but such is the reality of the Melbourne Renegades. It’s been a thoroughly underwhelming season for them, with only 2 wins from 11 matches despite starting with one. Nevertheless, almost every team has terrible seasons, and the Renegades are no strangers to those. All they’ll want now is to finish on a pleasant note. Next up, they will face their fellow Melbourne team the Stars. Up in third place after an important win in their last match, the Stars are still well within the reach of the 4 teams below them, so they will want to make haste in getting out of that range. Before the second Melbourne derby begins, let’s take a look at the teams.

No longer bound by the pressure of qualification, the Renegades can now finally just breathe easy and hopefully play some good cricket. In their previous match, they were under massive pressure while navigating a do or die situation against the Stars. Batting first, the Renegades batting lineup couldn’t perform well with the exception of Sam Harper, who made a decent 63 off 52. That being said, he was a little too slow. Mackenzie Harvey helped with 29 off 17, but there just wasn’t another effective innings as the Renegades collapsed for 150 with one ball to go. On the defense, their bowling was once again disappointing. Only Kane Richardson picked up more than a single wicket, bowling well for his figures of 4-0-24-2. In the end, MR did far from enough as they lost in the first ball of the final over.

After teetering on the edge of failure for a while, the Stars have come back. However, a lack of wins now could well put them back into the same situation before they know it, so the pressure’s still on them to get more wins. In their last match, their bowlers bowled superbly to restrict the Renegades to a tepid 150. Liam Hatcher was at his peak as he picked up 3 for 29, while Billy Stanlake and Zahir Khan also got one each. On the hunt for 151, the Stars lost Fletcher early, but Marcus Stoinis and Nick Larkin got identical scores of 43 to help get their team closer to the target, which they eventually overcame with 6 wickets in hand.

It’s a borderline perfect day for cricket. The temperature will hover between the late teens and early 20s, the humidity will be moderate, and a nice breeze will be blowing, but best of all, the chance for rain will be almost non-existent on a sunny Melbourne day.

The pitch seems to have favoured fast bowlers quite a bit in the last match, but spinners can also be effective. There’s still a little something in the pitch for batsmen, but one can’t take it for granted. Any first innings score above 160 should be formidable.

Can the Renegades emulate this year’s Chennai Super Kings and start winning after getting knocked out? Or will the Stars keep dominating them as they march onward up the table? Find out if our Melbourne Renegades vs Melbourne Stars predictions come true on Wednesday! 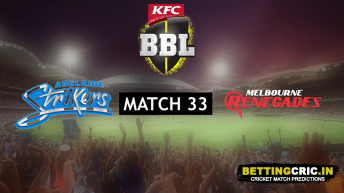