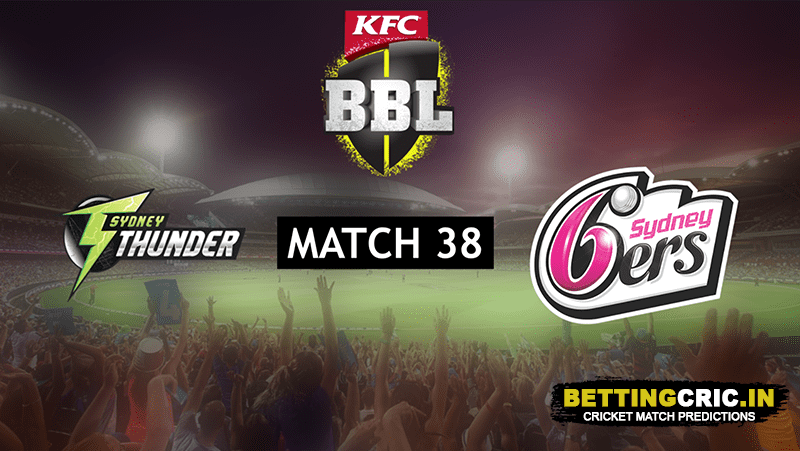 It’s the one everyone’s been waiting for since about 3 games into the season. The two Sydney teams have been the pick of the lot this season, and with an equal number of wins and losses, are separated only by the two extra Bash Boost points that the Sydney Sixers have. The Sixers might be the marginal favourites being the defending champions as well as the more dominant of the two teams, but the Thunder are not to be taken lightly as they have less pressure of expectation and have nothing to lose. The winner pulls away from the pack, while the loser risks getting caught up to and overtaken by the rest of the teams. Brace yourselves - this is the big one. Before the fuse is lit, let’s take a look at the two sticks of dynamite.

Constantly punching above their usual weight, the Thunder have made it this far in style, but now comes their true test of mettle. Following their defeat against the Perth Scorchers, they will be under pressure to win against the Sixers. In their last match, the Thunder bowled first, and despite early breakthroughs, couldn’t stop the flow of runs as the Scorchers raced to 185. That being said, the Thunder discovered a great talent in Brendan Doggett, who starred with figures of 4-0-22-4. On the chase, Usman Khawaja’s opening cameo was followed by a flurry of wickets, and despite the best efforts of Sam Billings (83 off 48) and Ben Cutting (31 off 27), no one else could provide the right support, and the Thunder fell 17 runs short.

Although not as consistent as they have been in some seasons in the past, the Sixers have been good at staying ahead on the basis of the nifty little Bash Boost points. Going into this match, they will have the slight mental advantage of having won the last match. In that game, the Brisbane Heat batted first, and thanks to Carlos Brathwaite’s 18-4, Jake Ball’s 25-3, and Jackson Bird’s 22-2, the Sixers were able to restrict their opponents to a tepid 148. On the chase, the Sixers had a start so poor that it looked like they would end up losing, but thanks to a brilliant dual effort from Daniel Hughes (51 off 35) and Daniel Christian (61 off 38), they were able to win the match off the very last ball of the match with 3 wickets in hand.

The weather should start off pleasant, but there will be quite a sharp rise in temperature as the sun rises higher. Some clouds will provide respites from that, but they are also very slightly likely  to open up here and there. There will be a slight breeze to ameliorate the effects of the heat.

There’s plenty of good in the Manuka Oval pitch for batsmen, with most scores hovering around the 170-190 mark, but any aspiring big hitters should also be wary of the turn the ball will experience. The team batting first should try to get at least 190 or so if they are to feel somewhat safe.

Can the Thunder make all their hard work count when it matters the most? Or will the defending champions justify their position and pull further away? Find out if our Sydney Thunder versus Sydney Sixers predictions come true on Wednesday!