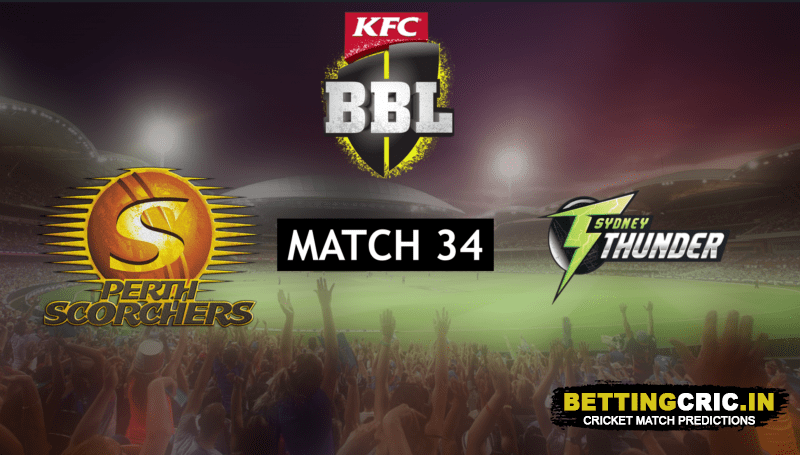 As far as comebacks go, the Perth Scorchers’ current run is a pretty solid example. After losing 3 of their first 4 matches (with the other being a No Result), they have come back in a big way with 3 consecutive wins. All they need now to crack the playoff spots is one more win, and then it becomes all about staying up there. After their win against former league leaders Sydney Sixers, they will now face current league leaders Sydney Thunder. The Thunder have been excellent this season, leading the table at the time of writing with 6 wins and just two losses. They are currently marginally above the defending champions and their derby rivals, and they would love to extend that lead. Before the two teams go at each other’s throats, let’s take a look at how they’ve been doing.

Since having their hopes resurrected, the Scorchers seem to have flipped the script entirely. Their most recent win was the crowning point of their comeback so far, as they took down the mighty Sixers in spectacular fashion. Batting first, Colin Munro’s 50 and Mitchell Marsh’s 57 combined with smaller cameos from some of the other players took PS to a commanding 183. On the defense, the Scorchers just kept on striking, not letting partnerships develop. Underperforming until now, Andrew Tye was the star of the show with 20 for 4 off 3.4 overs, while Jhye Richardson was also brilliant with 3 for 15 from 4. With a few other contributions, the Scorchers held the Sixers down for a miserable 97 to win by a huge 86 runs.

The only risk of being at the top is the shock of a fall, and despite falling to the Brisbane Heat in the previous match, the Sydney Thunder bounced back to take a comprehensive win in their match against the Hobart Hurricanes. Asked to bat first, Usman Khawaja led the way with a solid 49, Alex Ross later followed up with a strong 44, and Ben Cutting blazed away to a lightning-fast cameo of 31. Altogether, the Thunder scored a respectable 167. Although it initially looked like HH might come away with a win, ST came back strong. Nathan McAndrew, Chris Green, and Tanveer Sangha took 2 each, while Adam Milne and Arjun Nair picked up single wickets. Combined with very economical bowling across the board, the Thunder held the Hurricanes back for a convincing 39 run win.

With the temperature falling significantly from Friday, quite a bit of cloud cover, and a nice breeze, Saturday should be a good day for cricket. The only possible damper is a small chance for rain, but that probably won’t affect the game much anyway.

While batsmen and fast bowlers are both enjoying the Perth pitch, it seems to be decent for spinners as well. Expect first innings scores of around 170-180 to be decent on this ground.

Can the Scorchers make it 4 wins in 4 to complete their comeback? Or will the Thunder overrun them and get further away from the rest of the pack? Find out if our Perth Scorchers vs Sydney Thunder match prediction come true on Saturday!