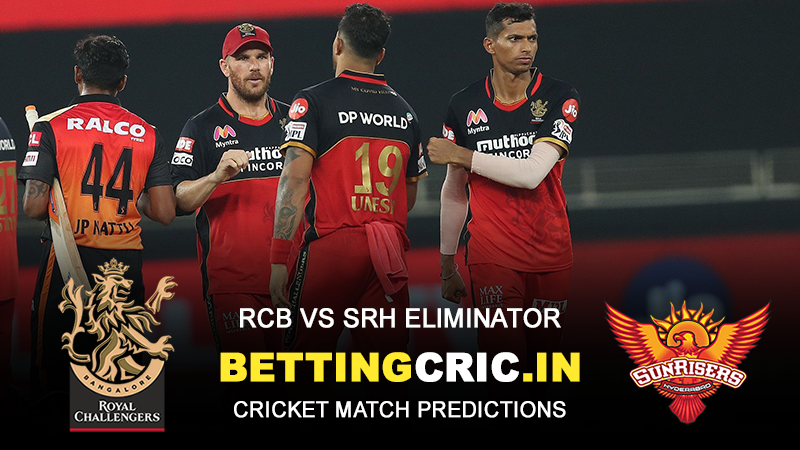 6.11.2020, 19:30 IST
Sheikh Zayed Stadium, Abu Dhabi
While Mumbai Indians and Delhi Capitals battle in the first qualifier, in the first eliminator we have Royal Challengers Bangalore and Sunrisers Hyderabad fighting for a ticket to meet one of them in the second one. It could very well have been RCB up there with Mumbai had it not been for a string of losses near the end of the league stages. In fact, the only reason they ultimately managed to qualify is because of a number of other results that went their way while they stood idle in terms of points. On the other hand, SRH were all but counted out of contention before they came back with a bang, winning 3 games back to back and four of their last 5 to squeeze into the playoff spots courtesy of their net run rate. Both of these teams are hungry for a chance to get to the final, and they will be at each other’s throats for the win. Before this tightly contested encounter ensures, let’s take a look at the two teams.

Since their loss to Sunrisers Hyderabad in the final of IPL 2016, RCB hadn’t managed to qualify for the playoffs. Despite a shaky start this year, RCB’s star players came into their own to get them up into that elusive second round. That being said, they could and should have done much better given how well-poised they were in the middle of the season. Their biggest point of worry right now will probably be the apparent lack of form of their most important batsmen, Virat Kohli and AB de Villiers. Additionally, RCB’s bowlers haven’t been as incisive as they had been earlier in the season, and that needs to change if they want to contain or dismiss the likes of Kane Williamson and David Warner - especially when they’re on a high from making it into the playoffs by a hair.

What started out as a seemingly disastrous season has turned into a fairytale comeback for Sunrisers Hyderabad. At a pathetic 6 points with 9 games down, David Warner’s men looked destined to be in the bottom 3 if not dead last. However, a myriad of other results went SRH’s way, and they ended up denying qualification to 3 other teams while going through a virtual gauntlet. When the dust settled, SRH sat pretty in 3rd place. Their batting has been looking crisp and solid, while their bowling, a strength throughout the tournament, has risen to new levels. One could argue that given their form, they are the most dangerous team in the playoffs after Mumbai. It will indeed take RCB’s best - or indeed SRH’s worst - to knock the latter out now.

Speaking of RCB’s best, their star players are notorious for choking in knockout matches, and it will be interesting to see if they can change that up now. Expect Devdutt Padikkal and AB de Villiers to bat well, while Washington Sundar and Chris Morris get their jobs done with the ball.

SRH’s form has been formidable to say the least, and they can go into this with high confidence in their players. Expect David Warner, Manish Pandey, Rashid Khan, and Sandeep Sharma to star in their respective areas of expertise.

Can RCB best the Sunrisers to keep their dreams of a first IPL title alive? Or will SRH continue their winning run and head to the second eliminator? Find out on Friday!
Do you agree with this Prediction?
Like
+9
Dislike
Want to start with a bonus? Choose the best Betting Site for youWhere are you from?
India Bangladesh
Tags1XBET Cricket Predictions, MELbet Cricket Predictions, Toss Prediction