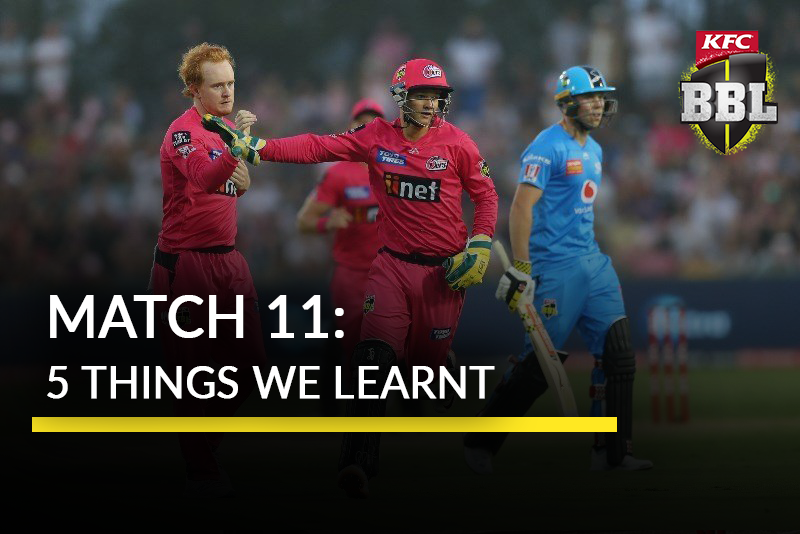 Unlike Melbourne Renegades the year before and Adelaide Strikers the season before that, Sydney Sixers are showing strong intent in their title defense, and actually starting to pull it off. They may have started with a loss, but now they’re firmly in third position with a game in hand over the league leaders, and given their bludgeoning of the Renegades, boasting a net run rate leaps and bounds ahead of the others. The Strikers, on the other hand, are now precariously in fourth place, with two losses and a single win destined to go down as soon as either Sydney Thunder or Perth Scorchers get a win. How did the Sixers beat the Strikers for the table to be this way? Here’s 5 talking points from Sydney Sixers vs Adelaide Strikers.

SS were off to a slow, shoddy start. At 58-3 after 11.1 overs, it looked as though they would only get to a lukewarm 130-140 at best. However, the two Daniels were at the crease. Daniel Hughes held up his end while Daniel Christian, well, let’s just say he went berserk. Hughes made 46 off 41 and could honestly have done better, but it certainly formed a large part of the Sixers’ inning. Christian’s contribution was far more vital, and made him the player of the match.

The importance of his performance may have been lost because his team lost, but Daniel Worrall was incredible with the ball. As we have said before, anyone bowling at less than 4 an over in T20s is doing an amazing job, and Worrall only went for 3 an over. The Strikers all-rounder is quickly making a great name for himself this year, and we look forward to more from him in the future.

3. A strong start that faded away

For once, two openers seemed to start in a promising way in BBL 2020, but it was not to be. Although 28 off 16 and 27 off 15 are better than what many opening partnerships (including Salt and Weatherald) have put up together in recent games, it wasn’t anywhere near what they needed to get, especially considering how the rest of the team did. However, it did get them a potentially important Bash Boost point.

There’s struggling to get runs, and there’s lacking any real intent. When a middle-order batsman comes in at 66-3 with the team needing 112 from 77 and makes 36 off 38, it’s an insult to the T20 format and an insult to the team he plays for. While it would be understandable if this were later in the season in a situation where the Strikers badly needed to preserve their net run rate, it was unforgivable under the circumstances.

When 4 of your bowlers stand out with performances ranging from decent to excellent, it’s okay if your strike bowler has a relative off day. Although Ben Dwarshuis didn’t do much, Steve O’Keefe, Benjamin Manenti, and Carlos Brathwaite all bowled extremely well - picking up wickets while also remaining economical. Daniel Christian, the hero with the bat, also bowled very well for his 4-0-25-1.

Undoubtedly happy with their win, the Sixers will undergo a true test of skill when they go up against a thus-far unbeaten Melbourne Stars at the Carrara Oval at 3:50PM IST on Saturday, December 26.

Keen on getting another win, the Strikers will face the seemingly underpowered Brisbane Heat at the Brisbane Cricket Ground, Woolloongabba, Brisbane at 1:45PM IST on Wednesday, December 23.

As predicted, the Strikers won the toss, but the Sixers won the match.

Among other speculations, SS also had the most sixes. Join us next time when we review the BBL match between Sydney Thunder and Perth Scorchers! 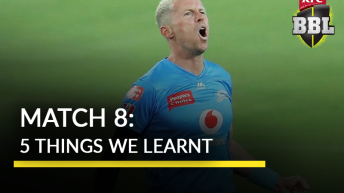