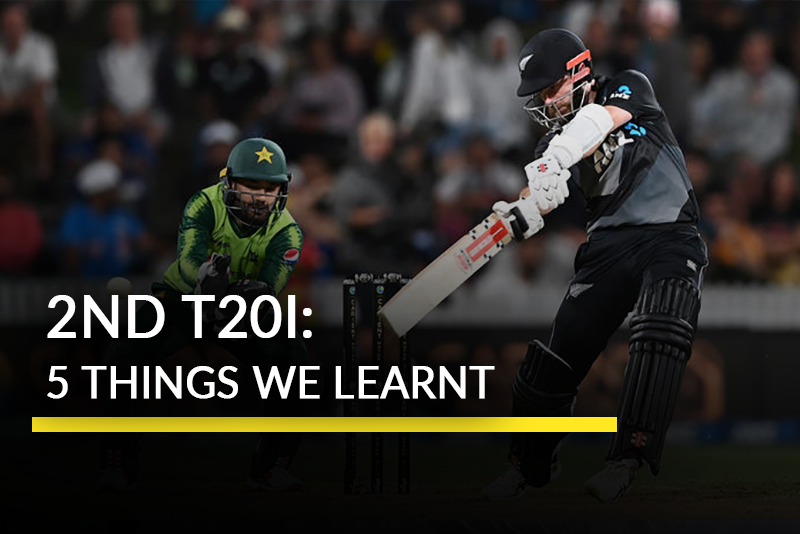 The trend of streak-counter-streak continues for New Zealand and Pakistan with today’s match. New Zealand dominated with first ball then bat, and came away with a comfortable victory that went closer to the end than it had any reason to go. Meanwhile, despite a one-man army attempt from a grizzled veteran, literally no one else stepped up for the visitors, and they failed to take the series result to the third and final game. For those of you looking for some more details, here’s 5 talking points from the second T20I between New Zealand and Pakistan.

With no Babar Azam, Pakistan were always going to have problems with the batting lineup, but the fact that only one person has really stepped up in 40 overs of cricket in this series is sad to say the least. Last match, it was more understandable because they had lost a lot of early wickets, but today it was simply inexcusable. When there’s a set batsman at one end, and not a single person can help him, it’s quite sad to see. Absolutely dreadful display of batting.

Anyone who watches cricket regularly knows that on some days, some people just play like they are possessed. After a golden duck in the last match, Mohammad Hafeez was in the form of his life today as he smashed an beautifully agonizing 99 off 57. Even when he got no support, and his teammates either wasted valuable deliveries or just got dismissed, he kept going right up till the end of the inning. Amazing work by the veteran.

Mohammad Hafeez wasn’t the only oldie to play superbly today. Player of the Match Tim Southee was marvelous as well. In a match where younger, arguably fitter pacers like Boult, Jamieson, and Kuggeleijn couldn’t get anything done, and literally every other bowler from both teams combined took only 3 wickets, Tim Southee took 4 for only 21 runs off his 4 overs.

4. Seifert and Williamson: crisp and clean

When the target requires you to score at more than 8 an over, it’s rare for the chase to go as smoothly as it did today. Guptill may have departed early, but then Seifert was joined by Williamson, and the duo seemed to just sail through. Granted, they weren’t challenged much, but the fact that they overtook such a target so very comfortably was a sight to see. The pair put up 141 between them, and the partnership sealed Pakistan’s fate in the series.

Being a team known throughout history for its bowling, Pakistan look strange when their bowlers fail to take more than one wicket. Their premium quick, Wahab Riaz, was blown out of the water - conceding 19 runs in his solitary over. Faheem Ashraf was the best of the lot with figures of 3.2-0-19-1, but the common factor between every other bowler was unfortunately a ‘0’ in the wickets column.

While Pakistan figure out how to break New Zealand to cart off some of their dignity, the Kiwis might rest some key players before the upcoming Test series. The Third T20 will take place at McLean Park, Napier, at 11:30PM IST on Tuesday, December 22.

While New Zealand won the match once again, Pakistan didn’t win the toss as predicted.

Among other predictions, Williamson and Seifert both got fifty plus scores, though the former wasn’t the top scorer. Plus, New Zealand were tied with Pakistan on sixes. Join us next time when we review the third T20I between New Zealand and Pakistan!