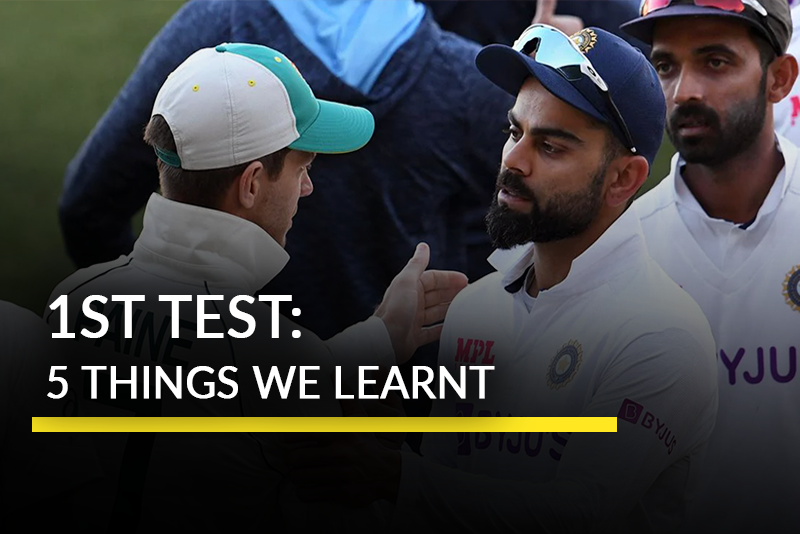 Unlike records in most sports, cricket records are broken relatively more often. One thing remains constant across all sports, though. Any record brings smiles to one group of people, while leaving another group anywhere between sad and utterly devastated. Today, a record was broken, and the aforementioned reaction is still sending shockwaves across the cricketing world. If you’re a fan of Indian cricket, you might want to brace your eyes because you have no doubt heard what happened. Without further ado, 5 talking points from the first Test between Australia and India.

1. Back when we thought India was batting relatively poorly

With Prithvi Shaw flopping completely, and Mayank Agarwal also falling shortly after, it was up to Cheteshwar Pujara and Virat Kohli to steady the inning, and steady they did - albeit slowly and only for a while. Ajinkya Rahane also played a good supporting role, but it wasn’t long before more wickets fell, and India were bowled out for a total that was far less than what they would have wanted. It was but a distant whiff of what was to come.

Before Shami’s injury sidelined him for the match (and probably the series), India actually did really well with the ball. Umesh Yadav took 3, Jasprit Bumrah downed a couple, and Ravichandran Ashwin starred with 4. Add a runout by Shaw (probably the only good thing he did in the match), and Australia were packed up for 191 to give India a decent 53 run lead.

3. Why Tim Paine’s inning was so very important

Things would have been much more difficult for Australia had Tim Paine not done exceptionally well to keep his team’s hopes alive. With 5 of the first 6 batsmen dismissed for a total of 35 runs, Paine dug deep and scored at a relatively quick rate to take the fight back to the bowlers. With 73 from 99, he took Australia from grave danger to within touching distance of India. Mind you, at this point, it was expected of India to score at least 200+ to give Australia a target of 250+ for the fourth inning on a difficult pitch.

In the first inning, Mitchell Starc starred with 4 important wickets, but in the second, he was beaten to the chase by his in-form friends. Pat Cummins also took 3 in that first inning, but all of that was quickly forgotten because of what unfolded in the second. Four words: masterclass in fast bowling. It only took 21.2 overs for it to happen, and by the end of it, India were in shambles. Cummins got 4, but it was Josh Hazlewood with his ridiculous Test match figures of 5-3-8-5 that stole the show. Absolutely incredible achievement.

Let’s just put it this way: the highest scorer for India was Mayank Agarwal with a ‘solid’ 9. Hanuma Vihari followed with 8, and no one else could reach even 5. It was the lowest Test total in Indian cricket history, tied for the lowest Test total of all time, and the lowest Test total in 65 years. That makes it the lowest Test total ever broadcast on live television. Speaking of which, this is one match that Star Cricket is never going to show the highlights of, and a thorough reckoning will take place. The only silver lining is, India can’t possibly do as badly in the matches to come. Or at least, they hopefully won’t. After today, we really don’t know.

Jubilant but always wary, Australia will want to address it’s failed batting in the first inning to consolidate their lead in the second Test. Every Indian who says the word ‘cricket’ with interest more than twice a week, meanwhile, will undoubtedly spend several sleepless nights until the next test. There will no doubt be multiple changes to the lineup, especially with Kohli leaving for home for the birth of his first child. The second Test takes place at the Melbourne Cricket Ground at 5AM IST on Saturday, December 26.

We were bang on the money with both the toss and the result of the match.

As for other predictions, Kohli was, ultimately, the highest scorer for India, and Ravichandran Ashwin the highest wicket taker. Tim Paine and Virat Kohli both scored fifties, and while India were tied for the most sixes (a laughable one each), Australia got the most fours as we speculated. Join us next time when we review the second test between Australia and India!

Highlights Of Each Match Day 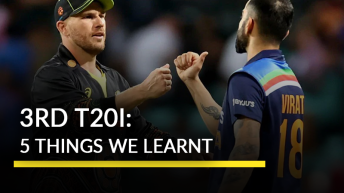 Australia vs India: 5 Talking Points from the 3rd T20I..